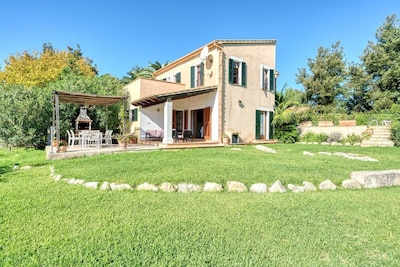 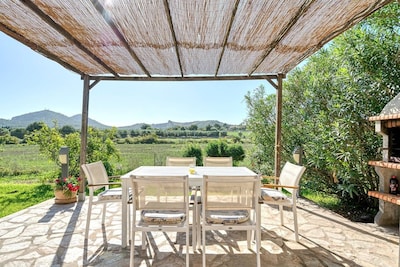 one double bed room, two twin beded rooms, one cot. all bedrooms are provided with Air/Con

Biking, hiking and bird watching takes over the normal summer tourism in the coldest months. Then the cyclists take the opportunity to train with professionals who use this region in the north of the island as a training camp to prepare for the Tour de France.

March and April see the island used as a starting point for migratory birds stop and attracts many birdwatchers who come to see a number of unusual species including black vulture are breeding in the Valley within walking distance Ternelles from the city. It is also near the nature reserve of Albufereta, which is home to many species of birds.

There are also plenty of excursions to the coastal areas and in the mountains to walk. Along with the celebrations and festivals throughout the year the city can really offer something for the entire year. There are many water sports available on the nearby beaches of Puerto Pollensa and Alcudia.

The beautiful beaches of Cala Sant Vicence and the sandy beaches of Puerto Pollensa are within 5 km and 3 km away. Also nearby it is a little further north is one of the most picturesque beaches of the Mediterranean, the beach of Formentor (once used in the Bounty ads). This can be reached by ferry from Puerto Pollensa or road within 15 minutes, making a spectacular tour with breath taking views on the way through the wind roads.

Puerto Pollensa and Cala San Vicente are 5 and 3 km.

Pollensa is famous for its Sunday market where you can buy almost anything from fresh local produce memories.

The most northern foothills of the Sierra de Tramuntana are the backdrop of the Mallorcan town of Pollença. The town has a medieval old town which is just a few kilometers from the Mediterranean Sea. This city, in the shadow of the mountains of Puig de Pollença and Calvari, has managed to preserve intact its personality, despite being only a short distance from the bustle of the beach. Pollensa has been a preferred destination of painters and artists since the beginning of this century destination. Here, the cultural and artistic life never stops. The main square with its cafes and chic restaurants is the hub of the towns unique charm. There are a lot of art galleries and museums. For most of the year you can enjoy a variety of musical events and fiestas among which the most famous are those that take place in the cloister of Santo Domingo. The town is open all year round with walkers, cyclists and bird watchers taking over from the summer tourists in the cooler months.