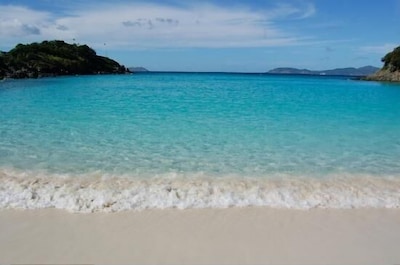 Both bedrooms can be made up with two twins or 1 king. One bedroom has a private ocean-view deck

Bob and Barb and their two grown sons Bobby and Richie are avid swimmers, snorkelers and scuba divers. Having lived near the ocean most of their lives they decided to build their retirement home on a beach. After over 20 beach vacations throughout the Caribbean, Hawaii and both coasts of Mexico, they decided on St John due to its exceptional beaches, 'Park-like' environment (St John is mostly National Park), lack of crowds, privacy, and the security of being a United States Territory, etc., they made the easy decision to build on St John. Bob is a retired structural engineer/construction manager who worked for one of the nations largest commercial contractors for 35 years and in his spare time has built the family's homes each time they relocated around the country. So building their retirement home was a natural progression. We used local labor to clear the land and build the foundation and then with Bob as the crew chief, Barb as the crew cook, their two sons and five of their college buddies erected the post and beam home in a little over three weeks. Local labor came back at that point to finish the home out. After receiving her masters degree in Physical Education, Barb taught physical education for over 30 years in several states including Rhode Island and California. She was also a USS swim coach and US Masters swim coach. Barb was an accomplished swimmer at UNC Chapel Hill and continued swimming as a masters swimmer, winning several national championships. Bob received his engineering degree from Duke where he also swam and he and Barb have swum masters together for over 40 years now. They recently teamed up for a 'mixed' relay with another couple and set a national record for the 55 to 59 age group. Their oldest son, Bobby is a Doctor, as is his wife of 5 years. Their youngest son, Richie, is an accomplished freelance photographer, living with his speech pathologist wife of 10 years in Portland, Oregon.

Bob Crowder purchased this Villa in 2005

Bob had visited the Virgin Islands while on a training trip with the Duke swim team back in 1975 and swore to all his college buddies that he was going to build a home and retire in the Virgin Islands. Of course they didn't believe him. After over 20 beach vacations throughout the Caribbean, Hawaii and both coasts of Mexico, Barb and Bob decided on St John due to its exceptional beaches, 'Park-like' environment (St John is mostly National Park), lack of crowds, privacy, and the security of being a United States Territory, etc they made the easy decision to build on St John. Of course Bob makes it a habit of inviting his best swimming buddy from Duke to visit every year at Seahaven to rub it in that he decided at age 19 where he was going to retire!!!

Seahaven is situated directly on one of the best swimming and snorkeling beaches in the Islands with fantastic views of the crescent shaped tropical beach of Privateer Bay off the deck. In addition, some of the best beaches in world just minutes away by car. Most of the island is a National Park founded by the Vanderbilts in the late 50's making St John a unique tropical paradise.