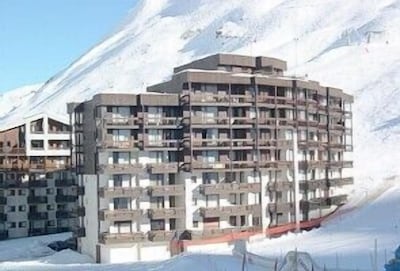 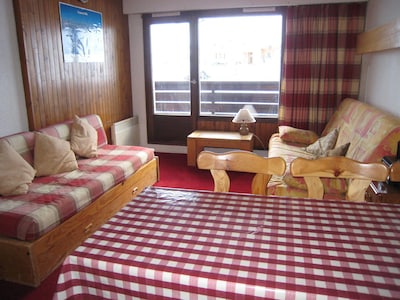 1 double bed (mezzanine) and two single beds are available in the bedroom. There is a double sofa bed in the lounge area as well as 2 single beds. Maximum comfortable sleeping in the apartment is 6. Single, double and king size duvets are provided as well as pillows and blankets. Clients are requested to bring their own bedlinen and personal towels as we do not provide them. Bedlinen and towels can be hired in Val Claret if required.

Tignes is situated in the 'Espace Killy' ski region, known as the greatest ski area in the world. With its neighbouring resort of Val d'Isere, it offers unrivalled skiing for all standard of skiers, including children. The resort itself has undergone a complete transformation over the past few years and now offers all the modern conveniences that skiers expect, both during the day and at night. There is no other modern european resort to rival Tignes, its accessibility, its location and its convenience. Once you have been - nowhere else compares!

Ski: The ski resort continues to go from strength to strength. There has been an extensive lift replacement programme with almost all of the lifts in the Espace Killy ski area replaced by high speed geared express lifts - making the lift queue a thing of the past. Tignes is the only resort that I know of that no matter how many skiers are on the slopes at any one time, there is never a lift queue. This is one resort that has got it right!! Why put up with queueing? Come to Tignes and ski!!

Summer: During the months of July and August, Tignes comes alive - not only with summer skiing on the Grande Motte glacier, but with the sound of mountain bikes. Graded bike trails have been created all over the Espace Killy and the link with Val d'Isere was opened in the summer of 2012. Key ski lifts have been fitted with bike carriers to take riders up the mountain and are currently FREE!! For the non bike enthusiast, there is sailing on the lake, horse riding, walking trails around the Vanoise National Park, watersports, white water rafting at Bourg St Maurice, and lots of other sporting activities - or just sit around the lake sunbathing!

Ask a question
Member Since 1998

Mark and I met skiing in 1981 and have been skiing together ever since! Val d'Isere and Tignes have always been our favourite skiing area and we always came back, particularly at Easter. We now travel to our apartment at least 3 times a year from our home in Chichester in West Sussex.

No. 4 Les Tommeuses became available in 1988 and was the first property we viewed in Tignes. We had seen the apartment building being built in 1985 as we went up the Bollin chairlift and I always wanted to have an aparment there. We fell in love with it and the rest is history!

The view from the balcony is second to none as well as the proximity to the slopes and the ski in - ski out nature of the apartment. The Gardien (Florence) is fantastic and will help you with any problems. We have tried to make the aparment as comfortable as possible and keep it well stocked with all the necessary kitchen utensils etc. to make your holiday as pleasurable as possible. The apartment is close to over 30 restaurants and bars yet on the edge of the slopes and very very quiet. The apartment is so close to everything you need and in the summer the views from the balcony are just as breathtaking. We love watching the traditional alpine dairy farming with the gentle sound of cow bells ringing in the air. Mountain biking has really taken off in Tignes/Val d'Isere in the summer and the apartment is perfect for an activity summer holiday. There are trails of all difficulty across the whole of the Espace Killy area.