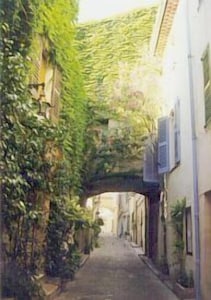 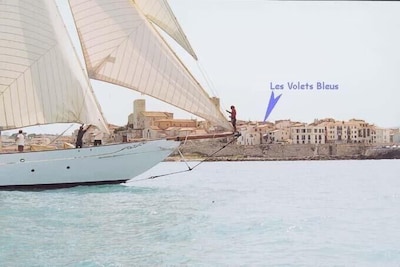 A bedsofa in the studio on the groundfllor, 1 double in the bedroom on the first floor next to separate toilet and bathroom, second double on the open loft above the living with another additional bedding on a sofabed, in the living another sleeping possibility on the big settee group in leather which is also suitable as bed. 2 cots provided, as one highchair

'I have known Antibes for more than forty years and I have lived here for twenty. It stands alone as the only town on the Cote d'Azur that has kept its identity and its soul, and it is also the only one where I truly feel at home.'

This property is situated in the true historical part just a few steps from the sea, 'Plage Gravette' our house beach that makes a pool unneccessary is nestled at he feet of the quarter, some of the most familiar sandy beach places at whole Cote d'azur. At Antibes harbour next to it you'll find yachts only seen in films or television before, the Picasso museum -former Grimaldi castle- is near just like a neighbour, the Marchée Provencale also at no distance to get fresh food every day around the corner, plenty of restaurants to approve every day another one, none that can be called bad. The house is situated in a quiet pedestrian area, no car needed - carrentals nearby - parkingspace with a special resident card in the nearby harbour can be provided on request.

The house has on the loft level above the kitchen and living area a very nice terra cotta tiled terrace which is framed by blossoming climbing plants all around, protected against wind and -view already with partly sea view. NEW: Since 2012 we added a four steps higher new platform with terrific panoramic sea view above the houses in the first row at the waterfront as we widened the older part with a U-form sittingplace with a big table that permits to dine with up to eight on the terrace.

in the nearby Alpes fast to reach

Ask a question
Member Since 1999

To be honest the foto shows us as proud owners some years ago, but although maybe we're not looking the same we still look with the same pride on this second home of us

Robert Ammann purchased this house in 1998

we fell in love with Antibes some years ago before we bought this property already. Friends invited us to come at easter with them to Juan les Pins where they went to already since years as a tradition. We never thought of coming to La Cote d'Azur before but discovered it against our maybe preformed opinion as a place that we understood why so many artists came because of the splendid light. Our preference became Antibes, and especially the old town settled on the rocks just a bit above the sea. Antibes was really a village in the town that grew since long already arround from Nice to Cannes. Although also Antibes awoke just like a sleeping beauty to an active and very alive place with enormous cultural power it still kept this special character why we love this place for, probably unique on the whole Côte d'Azur.

Les Volets Bleus are settled in the historical part of Old Antibes , there was once nothing more than these three little streets on greek and roman settlings. It has the sea at his feet, the daíly market arround the corner, just a stonethrow away from the Picasso museum in Le Chateau Grimaldi, from where Picasso went passing by our house when he walked down to the harbour every day - and surprisingly this part of the Old town is sdespite it's super central location still quiet without any shops or bars only a (small) Michelin star decorated restaurant is opposite the house, and some artists are working and living there and exposing their paintings.