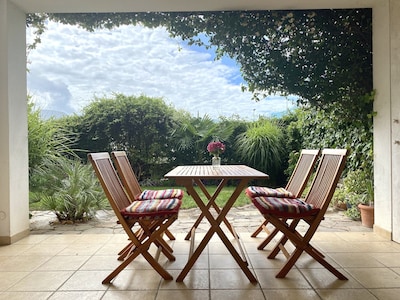 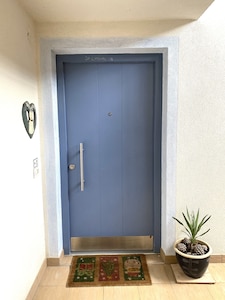 Apartment with enclosed garden in a central location-dogs welcome

The village of Tirolo is located in the Merano basin in the hills with a panoramic view of the city of Merano and high up in the surrounding mountains.

Tyrol is on an altitude of 600 m in the middle of the meletti and vineyards.

Tourists open the village for its tranquility and proximity to Merano.

From Tyrol you can immediately reach high altitude with the cable car of the farms of the moult that leads to the Tessa group natural park. The farms of the wetsuit are an excellent starting point for many easy and demanding excursions to the Sopranos lakes or to the peaks of the Monte Tessa Group.

The Muta farms are also a popular destination for paragliding enthusiasts.

From the village of Tyrol, a chairlift takes you to the historic center of Merano.

A short walk leads to the 11th century Castel Tirolo, rich in frescoes and architectural sculptures in Romanesque style. Every day two flight demonstrations of birds of prey at the Avifauna Castel Tirolo Recovery Center.

Castel Fontana houses an agricultural museum, a small zoo and the memorial of the poet Ezra Pound.

Tappeiner Promenade: The splendid sun-kissed promenade offers breathtaking views of the Merano valley. The 4 kilometers of path develop from the Gilf walk and follow the profile of Monte S. Blessed up to Quarazze.

Falkner promenade - runs along the town - splendid view of the Merano valley.

In spring the beautiful season begins with the flowering of the apple tree where all the trees are dressed in white. The botanical gardens of Trauttmansdorff Castle are a destination for many Flora enthusiasts almost all year round. In summer, internationally renowned musicians play in the castle park (World and Jazz Music Festival).

Summer is the season of the mountain with the mountain huts, of the folk festivals, of the swimming pools such as the Merano Thermal Baths, of the lakes and in the evening of a nice outdoor barbecue.

In the autumn, the harvest period is followed by the paths of apple or grapes in Tyrol and the farmer is met in the fields while he collects the fruit. The traditional "Törggelen" with chestnuts, must and speck occurs in many farmhouses in October.

In Merano there are all gourmets and lovers of good drinking at the Merano Wine Festival in the first weekend of November.

In winter you can ski nearby on the slopes of Merano2000, Val Senales, Plan in Passiria, Val d'Ultimo and other ski areas.