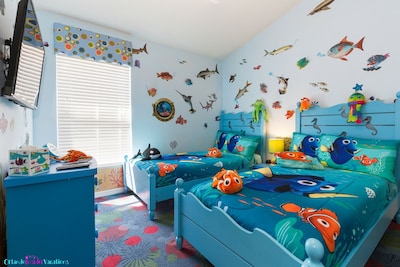 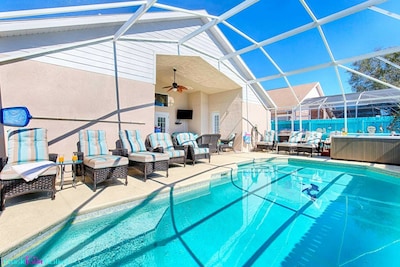 We have a treasure trove of tips, so don't hesitate to contact us with any questions at all.

There are two children's playgrounds, a fitness park, tennis court, basketball and multigames court, practice putting green and jogging/walking paths around the lake.

Indian Creek is situated in one of the most sought after locations available to Disney. Animal Kingdom is the closest Disney park to us just 4 miles away - we can even give you a great shortcut to avoid the traffic. We are so close, you can easily break the day by going back home for a cooling swim in the afternoons or head back to the parks in the evenings for the spectacular fireworks.

The Formosa Village is less than a mile away and is home to several restaurants including Outback Steakhouse, TGI Fridays, Wild Wings, Olive Garden and Red Lobster. The busy US192 Highway is just a minute further and home to a huge selection of stores and restaurants. There is a Publix and SuperTarget just 2 miles away and a 24 hour Walmart just a little further.

Ask a question
Member Since 2005
Sarah & Ken Elder is a Premier Host·The owner or manager of this property consistently provides great experiences for their guests.

Hi there, we are Sarah & Ken Elder. Who knew when we bought our first home in 2005 that it would lead us down the path of a new business venture? We certainly had no idea, but we've now been welcoming guests to our beautiful Orlando vacation homes for over a decade and we love every minute. Imagine having a job where you help plan exciting and amazing vacations and get to deal with happy guests all the time! It doesn’t get much better! We spent 28 years living on an idyllic Greek Island where we owned and ran our own restaurant in a busy coastal village. Time eventually caught up with us and we left our beautiful Greek Island with a lifetime of memories. We now split our time between Florida and Ken's ancestral home in Scotland. We spend half the year overlooking a beautiful Scottish Loch and the other half on Disney’s doorstep in Florida. Who says you can’t have your Key Lime Pie and eat it too. And with Pixie Dust sprinkled on top :) We have 3 vacation homes so we have something to suit couples and small families and larger groups or multi-generation families. We have a firm commitment to provide wonderful relaxing and carefree vacations in beautiful homes. We look forward to being part of your vacation memories.

When we were looking to purchase a home, we had two main thoughts - there had to be a spacious living area where all the family could spend time together and it had to be as close to the Disney parks as possible to enable us to easily pop back home during the day. As soon as we walked into Serendipity, we knew instantly it was 'The One' we had been searching for. We found our piece of paradise and now have the magical theme parks just a stones throw away and also all the endless entertainment and recreational activities Orlando and central Florida has to offer. Fabulous beaches are within an hour's drive, the Florida state parks are just beautiful. Shopping and dining are endless and of course we have the beautiful sunshine which is just the icing on the cake.

We love the fact the pool is not overlooked in any direction, the high enclosure ensures complete privacy and it also has a great whimsical beach theme, so it's not just a boring old fence! The lighting around the pool and yard at night make it a great area to relax and unwind after a hectic day and nothing beats watching a movie outside by the pool. The outdoor living area is our favorite place and when we have friends and family staying, we tend to spend all our time out there just relaxing and enjoying time together. Perfect!