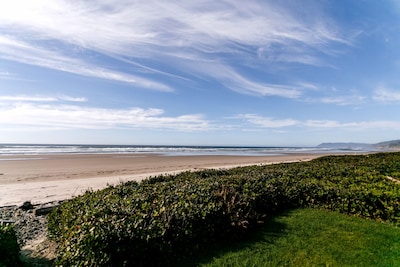 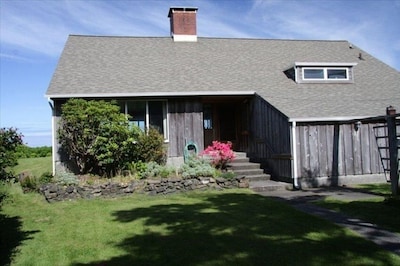 'Singing Sands' in Arch Cape, Six Miles South of Cannon Beach, OR In 1929, my great aunts, Elsie and Marie English, bought the Arch Cape Hotel and re-named it 'Singing Sands.' Family stories tell us it had been used by fur trappers and postmen. Elsie and Marie came down from Seattle in the summers and provided room, board, and beach fun to relatives and paying guests. Highway 101 did not reach Arch Cape at that time, so they had to drive on the beach at low tide. After Elsie and Marie retired from their teaching and school administration professions and moved to 'Singing Sands' permanently, they found it uncomfortable for winter living. Around 1955, the old 'Singing Sands' was torn down, and a new 'Singing Sands' was built, which I inherited in 1979. The present 'Singing Sands' contains original furniture and happy memories. It is on an ocean front lot with easy beach access. There is a view of the famous Castle Rock, about one mile out to sea. 'Singing Sands' sleeps six. A single bedroom is located on the first floor with two twin beds and a bathroom with a handicap-accessible shower. Upstairs are two bedrooms, one with a queen-sized bed and another with twin beds. This bathroom has a tub/shower. Each bedroom has a view of the ocean. The living room has a fire place (wood is provided), and the fully equipped kitchen was recently remodeled. Both rooms have ocean views.

Patty Kinch purchased this House in 1955