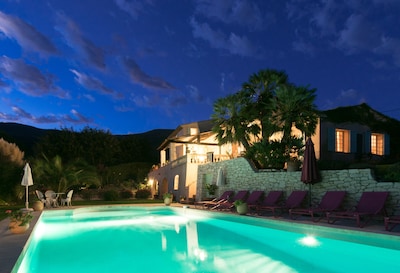 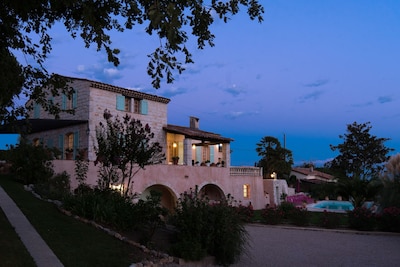 Tourrettes-sur-Loup is a beautiful medieval village situated on a hilltop overlooking the blue Mediterranean and its adjacent promontories. Built as a refuge over 1200 years ago against the invasions of the Saracens it became in the 20th century a place renowned for attracting artists of all persuasions: poets, painters, musicians, sculptors, film directors and movie stars. Among these were Humphrey Bogart, Ingrid Bergman, Claude Lelouche (of 'A Man and a Woman' fame), and Jacques Prévert.

Ten minutes away is famous St. Paul-de-Vence with its innumerable art galleries and the renown Fondation Maeght, home to a vast collection of Miro's, Giacometti's, Calder's, etc.

Further afield to the south the glamour and sophistication of Nice offer exciting nightlife complete with casinos, theatres, concert halls and the opera together with high-end world-class shopping.

The excitement of Cannes and its film festival are only 35-40 minutes away while Antibes with its world-class marina - considered the biggest and best in the Mediterranean - is even closer. Its elegant centre and fascinating Picasso waterfront museum are not to be missed.

Going north you encounter the romantic 'arrière pays' where life continues in the old ways and for the daring sport enthusiast there is paragliding and even skiing in the winter at Gréolieres.

Often at Christmas time you can be sitting in your shirtsleeves in the sunshine enjoying the view to the Mediterranean while contemplating the afternoon's skiing expedition!

Hosted by The Owner

Ask a question
Member Since 2005
The Owner is a Premier Host·The owner or manager of this property consistently provides great experiences for their guests.

I am a former French teacher, estate/search agent and interior designer with an international background. I grew up in and around New York city, moved to Rome where I lived for 8 years and then to London where I now reside. I speak 6 languages: English, French, Italian, German, Swedish and Spanish.

The Owner purchased this villa in 1986

Why The Owner chose Tourrettes-sur-Loup

'La Plantade' is a family home with antiques, art and memorabilia belonging to my parents and grandparents. As such, it is warmly welcoming and unique as a rental property. It contains many unusual items with historical significance.

The location of the house is perfect with respect to its distance to the lovely perched village of Tourrettes-sur-Loup. It is easily 'walkable' within 3 to 5 minutes - depending upon your legs, energy and hunger for that 'café au lait'! It has beautiful views extending to the blue Esterel mountains and sea by St Tropez to nearer mountains and bays plus beautiful Tourrettes. There is fantastic hiking, skiing, golf, food all within short distances.