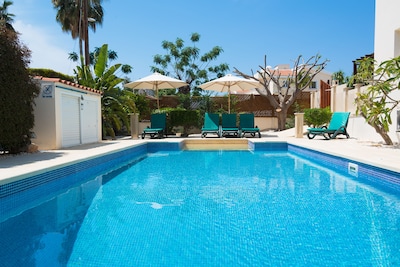 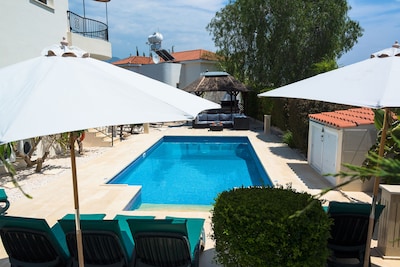 All bedrooms are comfortable, light and airy. All first floor bedrooms have air conditioning, remote quite fans separate quality heaters for the cooler winter nights, spacious fitted wardrobes with ample hanging space and a hair-dryer. The master bedroom has a king sized bed and ensuite complete with shaver socket/toothbrush charger. The second and third bedrooms have two 3' beds, there is also a fold away bed and cot available if required. The master and second bedrooms have double patio doors that open onto a large balcony which is furnished with a table and chairs where you have spectacular views of the mountains, ideal to enjoy your breakfast or morning cuppa in the Cyprus sunshine. The fourth bedroom is located on the ground floor has a double bed, wardrobes , air con and celing fan. patio doors open onto lower balcony.

I am June married to Chris we have two children a son Paul and a daughter Laura and two grandsons. We used to have a floor covering business but after Chris couldn't fit flooring due to damage to his knees after years of fitting, we decided to take a huge risk and buy a villa to use as our pension. We like to think of ourselves as being honest and genuine especially when describing the villa, all our reviews are genuine we also refund deposits before reviews so guests can be candid.

June Jobling purchased this Villa in 2004

After deciding on Coral Bay due to its family atmosphere and great location we had a really good look around to find somewhere as close as possible to all the bars restaurants but without the noise and on flat ground. The developer allowed us to make changes so we had the downstairs WC extended and had a shower installed making three, two upstairs (one over the bath )and 1 ensuite we also had the swimming pool altered to make it more child and non swimmer friendly but making sure it was adaquate to swim (please ask) . The villa really is less than 100 metres to the main strip! We also looked at villas about 130 metres walk but they were only about 30 metres behind the main strip and quite noisy on a night so the decision was made choosing what we believe is one of the best villas in Coral Bay

We believe Marina Villa is situated in the best location in Coral Bay, many guests have commented on the fact that although the villa is only 100m from the restaurants, shops etc it is still quiet in and around the villa. We specifically designed the pool with an extended shallow area especially for young children and non swimmers but also accomodating swimmers over the length of the pool.