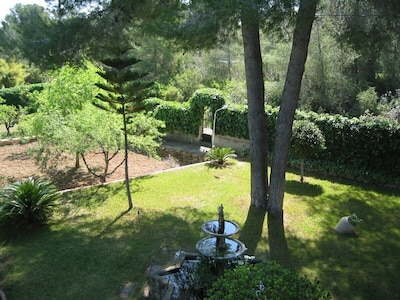 We have a good quality ('Pre-Natal') travel cot, which can be used for babies and very young children. If you require use of this, please let us know - it is provided free of charge.

The villa is situated in the countryside west of the city of Valencia between Villamarchante and Cheste. Ideal for relaxing away from the crowds and hustle and bustle. Local towns and villages have regular fiestas, which are lively family affairs with colourful parades, lots of eating and drinking and the odd firework or two. In the local town of Buñol, the world-famous food fight 'La Tomatina' is held at the end of August, involving 5 tons of tomatoes and several hours of mayhem! For something more civilised, there are the wine-producing areas of Utiel and Requeña, so why not indulge in a wine tasting trip and purchase some of their fine wines. Only 45 mins drive away is the cosmopolitan city of Valencia city with its stunning architecture, exclusive bars and restaurants. They city centre is quite compact and you can walk between most of the tourist attractions. A short cab ride from the city is the port area with its open-air terrace bars overlooking Malvarossa beach.

The main sporting events on the calendar are the Moto GP finale held around the end of October each year, which is a 4-day party in the town of Cheste a few kilometers from the circuit.

There is also the Valencia Open 500 tennis tournament in the city, which is an ATP event and features many of the world's best players.

Golf: The villa is situated about 20 minutes drive El Bosque golf course and 40 minutes from El Saler golf course. These are both fantastic golf courses and the facilities are second-to-none.

The El Bosque Golf Club is perfectly located a short drive from the villa. It was opened in 1975 and was designed by Robert Trent Jones Snr. who has designed some of the world's best golf courses. As a result of this, the club has hosted some of the most important international championships such as the Open 'El Bosque' (Volvo Tour), the Mediterranean Open, the PGA senior of the European PGA and the Queens Cup. If you wish to make a reservation call them on 0034 961808000 or send an email.

The El Saler Golf course sits beside the Mediterranean Sea within the pine grove of the same name. This course is considered one of the best in the world of golf and is a regular host to European Tour events, including the Spanish Open.

My name is Kevin and I live and run my own company in the city of Valencia. My wife and I are both British and have lived in Valencia since 2005. Prior to moving to Spain, we both lived in London and worked in the financial sector. We have two young daughters (Imogen and Scarlett). We are very lucky to own the holiday villa and we try to use is as often as we can at weekends during the year when it is not rented out.

Kevin Monger purchased this villa in 2005

The villa is a magical place. It feels like an oasis with all the trees and nature all around. We have a fish pond with lots of fish and three red squirrels live in the pine trees in our front garden. The are lots of places to sit and relax, perhaps reading a book, sunbathing, eating, drinking or just chatting with family and friends. The villa is fully equipped with all you need to enjoy a wonderful holiday and you can always jump in the private pool if you need to cool off!

The villa is built to a very high standard and has beautiful gardens, with so many trees and wildlife all around. This is what makes it such a special place. It is not something that can be easily created, the gardens are mature we make sure that they are properly looked after for us and our guests to enjoy.