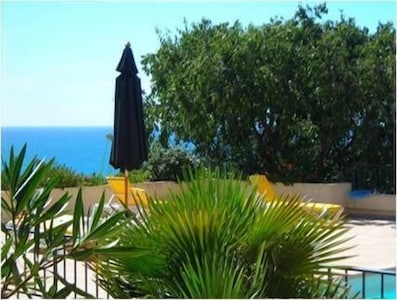 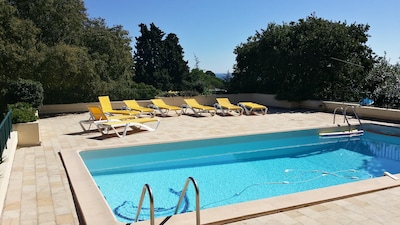 The sky, the sun and the sea ... Comfort and quiet pool in the countryside - Méditerranée

Room decor changes with the seasons. Protects the mattress and pillows are systematically changed between rental and disinfected bedding. Mite pillow Steam cleaning

Sète, almost an island, the singular Island as it is known so well, is available for genuine amateurs ...

Sète is first the little Venice with its canals which connect the big blue with the Thau lagoon, canals hosting the games, fight for glory sétoise but also, season, canals invaded by fishermen fans ready to fight to catch bream fleshy desire to have eaten in the pond their fill of molds and other dishes royal, do not they say also breams!

A tour of the market, there also is the colorful show ... and free! Of course you will be attracted by the stalls of fresh fruit and vegetables picked from around the goat cheese scrublands of the hinterland, fish, pasta, and other tial specialties sétoise kitchen.

Do not resist ... we will be happy to explain to you how to prepare your gourmet purchase. You will receive details of strength you forget in the moment, or rather drunk so charmed by singing words!

Sète is the fishing port in the city center with boats of all ages, young and old, wearing passengers, freight, the city is really open to the Mediterranean ...

Sète is the Mont Saint Clair which dominates both the city, the sea and the pond of 150 m!

Microcosm in itself, inhabited for 100 years about all types of people: aboriginal, some newcomers have been there for 20 or 30 years but will remain forever 'of strangers ...', retirees returning to the country after several decades past in other lands, attracted by the light, peace, love this place so singular, unique on the Languedoc coast.

Do not forget to open your nostrils as the Mont Saint Clair is rich with many species which, at night, deliver a range of scents. Stopping a moment in the shelter of a dry stone wall, you probably feel the aroma of pastis served well chilled ... and with a little luck, a MEMEE have prepared a tial 'couffle' of stuffing so secret and so fragrant, macaronade a family that will take you straight to nap.

In your dreams, you will find the great Georges Brassens was born and raised in Sete, whose temper is matched only tenderness.

And if you're a bit lucid, you can turn the pages of a book by Paul Valéry, another native son who lent his name to the museum overlooking the sea. Let your eyes fly the marine cemetery and now back the words of the poet.

There's still so much to say, but know that here, the reality beyond imagination, then a single slogan: abandoned with friends first!

A 5 minute walk, there is a bus to the beach, downtown or the super market.

Many leisure activities nearby: beach, water sports, diving, tennis, horse riding, skating, biking, casino, paintings exhibitions, visiting wine cellars (Muscat and others), many museums. Not a dull moment in Sète, many discoveries are offered by the tourist office and we can make suggestions based on personal taste.

Montpellier airport 35 km with many connections with Paris of course but also England, Ireland ...

To visit the area: the Canal du Midi and its locks, the vineyards, Pezenas, Carcassonne, the Camargue.

You can rent bikes, boats, motor boats with or without license (cabotage Thau - all channels of Sète - Canal du Midi)

NOTE: Beginning in 2014, I gathered my two rental ads which I deleted the notes vacationers previous years. However, you can view their assessments in the guest book located in the 'about Vonnick Malige'.