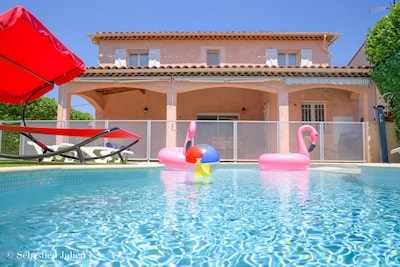 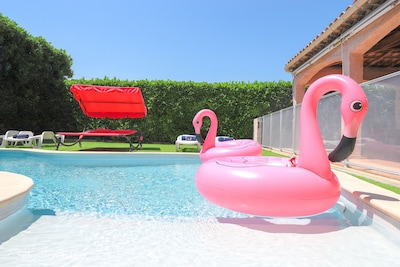 3 bedrooms are upstairs with a large walk-in closet and then a door allows for more privacy with the garden level bedroom. Upstairs, 1 160 cm bed, 2 of 140 cm. On the garden level, 1 bed of 140 cm 1 baby cot + high chair

Close to St-Paul-de-Vence and its art galleries; Cannes and its film festival and beaches; Monaco and its museum; Grasse and its perfumeries; Antibes, its battlements, beaches, thalassotherapy, Marineland, Antibes Land, and Aquasplash; Biot and its glassworks; Nice and its boutiques and local markets, restaurants, private beaches, Juan-les-Pins and its dancing nights, Vence and its Jazz Festival.

Located between Nice and Cannes. 6 km from Antibes and 10 km from Saint-Paul-de-Vence.

Blu Flag beaches since 2012. Golf and tennis court nearby.

Ask a question
Member Since 2002

Native of Villeneuve-Loubet, We are a couple with two children who perform studies. We will be happy to welcome you and stay listening throughout your stay. It is our good that we rent only in the summer and we enjoy the winters. If you want you can visit the property before renting.

Unforgettable holiday! purchased this house in 1997

It is an ideal place to relax and gather with family or friends. We have experience over the years and we are available to answer your questions. We want our guests to be well received.

Cleanliness and quiet. Azure blue for the sea and the sky; green for nature.