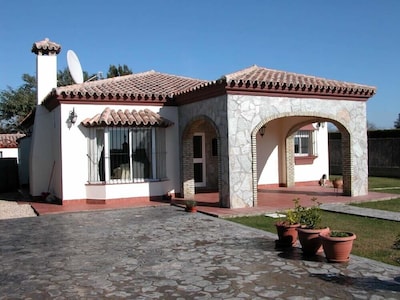 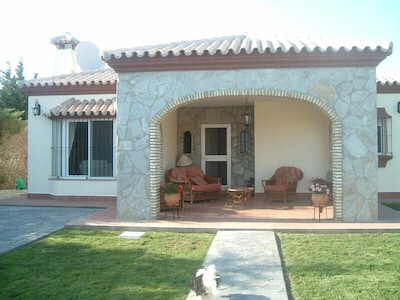 Two bedrooms have a double bed, the third bedroom has twin beds. A baby cot and high chair can be arranged if necessary.

El Sotillo is just 5/6 minutes from the 8 mile stretch of beautiful sandy beaches of both Nova Sacti Petri and La Barrosa.

This is a fairly upmarket, modern resort with a range of low-rise hotels and apartment and townhouse complexes.

The town has a clinic and a number of commercial centres, such as Centro Comercial Altamar and the Novo Center which have plenty of bars, restaurants, estatae agents and shops catering for tourists.

La Barrosa is one of Chiclana's two beach resorts with 8 kms of fine sand. It is a safe, sandy beach which has received the Blue Flag Clean Beaches of Europe Award.

Property in the area consists of low rise apartments and private villas. The native umbrella pine is protected and all development is forced to accommodate the trees. This makes for an agreeable environment.

La Barrosa has a pleasant seafront promenade with a number of reataurants and cafes looking out to sea. Seafood is on every menu.

The resort is very popular with Spanish people, particularly in July and August and on holiday weekends. The main street runs parallel to the beach. It has a range of bars, restaurants, cafes, shops and services.

In the Pinar del Atlantico area there is a tennis school and Tennis Club la Barrosa.

is an old, abandoned fishing village located at the northern end of the Playa de la Barrosa. It adjoins the Bahía de Cádiz Natural Park and has a wonderful 2 km beach which faces a little isleand of the same name.

According to local lore, the village was commandeered by General Franco and his entourage as their holiday retreat. The fishermen were forced out of their homes and when Franco died, the place fell into ruin. Now the area is protected to prevent inappropriate development. A few local people are moving back in and renovating some of the properties.

Here you will find a fishing port and marina, sailing and windsurfing schools and a few bars and restaurants. The Bar Bongo is located on the beach with lovely views over the estuary and out to sea.

From Chiclana, it is a short journey to the historic towns of: Medina Sidoni and Vejer de la Frontera

and to some beautiful nature parks in the mountains, e.g. Grazalema and Alcornocales.

Prehistoric remains have been found in this area, which proves the presence of man since the Paleolithic era. Chiclana has always been historically associated with Cádiz and, as in Cádiz, traces of Phoenician, Carthaginian and Roman civilisations are evident.

Steeped in history and legend, the little island of Sancti Petri has been linked with Hercules. An ancient temple to Hercules once stood on the headland. And according to myth, two of Hercules' 12 works were performed here.

Since the 16th century, Chiclana's economic development has been closely associated with the Bay of Cádiz, which at that time was the centre of trade with the American colonies. The discovery of America was very important for the development of Cádiz and Chiclana. The golden era for the region was the 17th century. A number of monuments and buildings dating from the 16th, 17th and 18th century can still be seen in the town.

You may notice that several towns in this western part of Andalucia have the words 'de la Frontera' attached. This is because it was the frontier between the Christian and Moorish areas back in the 15th century, before Isabel and Fernando finally ejected the Moors from the Iberian peninsula in 1472.

As a result of the economic development which began in the 60's and 70's, Chiclana is now a town with 53,000 inhabitants and enjoys increasing prosperity and growth partly based on tourist trade.

The climate is mild with few temperature extremes, little rain and more than 3000 hours of sunshine.

The local cuisine is based on traditional Andalucian cookery. The most typical dish is the Berza Chiclanera, cooked with chick peas, marrow, sweet potato, green beans, beef, chorizo (spicy sausage) and salt pork.

The Chiclana area, as well as the whole Bay of Cádiz, is famous for its seafood dishes. Fish and shellfish are all caught in the local seas or salt marshes. The king prawn of Chiclana is famous; its size is a little smaller but the taste is exquisite!

Pig-farming is important in the countryside around and pork sausages such as butifarras, longanizas and chicharrones must be tasted to be appreciated.

Pastrymaking and confectionary in Chiclana is a special delicacy, especially the almond tarts from the Convent of Madres Agustinas Recoletas.

Sailing and Windsurfing: there is a large marina at Novo Sancti Petri and also a windsurfing school.