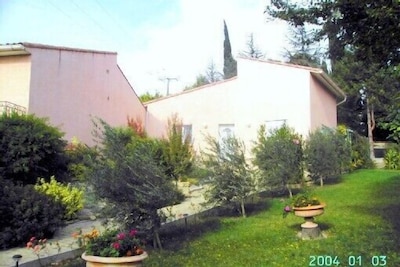 2 twin beds. two bedrooms upstairs are equipped with 140-bed, sleeps nine and comfortable, 'Possibility of new cot mattress.' baby linen not supplied for rent 20 beds 140 euros a pair.(You can provide), get them.

SOUPEX, our small village is at the limit of four other departments, Ariège and Andorra to the south, Haute Garonne to the west with Toulouse, the pink city at 55 kms, to the north the Tarn at 15 minutes, the Hérault department in the east with the city of Béziers at 130kms. The magnificent Audois landscapes, which we nicknamed 'Little France', the diversity is so great, the Cathar castles that we can visit, the city of Carcassonne, unique in the world, the Canal du Midi with its walking paths. The famous Cave of Limousis north of Carcassonne near the disused gold mine of Salsigne. Rental of boats and Pedalos at 10 kms, the Saint Ferreol lake and its magnificent sheaf, the Cammazes dam, and the Lampy lake, sources of summer freshness, forming the water supply chain of the Canal du Midi (work of Pierre Paul Riquet) water which, through the channel passing 2 km from SOUPEX, feeds the Canal du Midi, after passing the threshold of Naurouze and sharing the waters, half towards the Mediterranean, half towards the Atlantic, also to visit the large basin at Castelnaudary. The town of Limoux 'very beautiful' at the gates of the Aude gorges, a specialty to taste the 'Blanquette de Limoux', a unique and famous sparkling wine. All Corbières and Minervois wines. Come and enjoy the specialties of Castelnaudary 'The unique Cassoulet 3 km from the cottage, the hallelujahs and glorious pastries of Castelnaudary, the market on Monday morning, of this beautiful city to visit, for its Midi canal crossing and its unique locks. The market of Villefranche de Lauragais (31), on Friday morning, a few kms away, as well as that of Revel (31) most beautiful market of France on Saturday morning, We will be happy to inform you, on the places to visit next your tastes and desires. The City of Carcassonne is above all known as a fortified medieval town. But its history is much older: oppidum transformed in the 1st century BC into a Roman city, the City became in the 11th century the possession of the powerful Viscount Trencavel, which then dominated the Bas-Languedoc. At the end of the Crusade against the Albigensians, the City, endowed with new fortifications, becomes one of the emblematic strongholds of the kingdom, on the border which separates France and Aragon.

The construction of the outer enclosure and the modernization of the inner rampart make this place an impregnable fortress.

With the Treaty of the Pyrenees in 1659 which links Roussillon to France, the City however loses its strategic role, leaving its defensive works abandoned. In the 19th century, thanks to the joint action of the Carcassonnais and the Historic Monuments which entrusted its restoration to Eugène Viollet-le-Duc, the old fortress recovered its past physiognomy. It is now listed by UNESCO on the World Heritage List.

It remains the most formidable fortified complex that can still be admired in Europe. A true stone anthology: all along its three kilometers of ramparts, through its 52 towers, its two monumental gates, its barbican, its castle and its Basilica, in the labyrinth of its crenellated ramparts, its stairs, baffles and posterns, can be read with an open book all the architecture of the Middle Ages.

On the west face of the fortification is supported the castle built in the 12th century by the Viscounts Trencavel. Constantly modified during the following centuries, it is a veritable "fortress in the fortress", which today houses a lapidary museum. It presents an important collection of vestiges from the City and the region: regional sculpture from the Gallo-Roman era in the 17th century, stelae, sarcophagi, capitals, basin of Fontfroide Abbey (12th century), magnificent Calvary of Villanière (15th century), murals, statues, ...

The Basilica of Saint Nazaire was completed in the first half of the 12th century. Altered several times, the building harmoniously combines the Romanesque and Gothic styles, and has the most beautiful stained glass windows in the south of France (13th and 15th centuries). It lost its cathedral status in 1801 in favor of the Saint-Michel church located in the Bastide. In 1898 it received the title of Basilica.

. See you soon with us, we will welcome you with great pleasure.