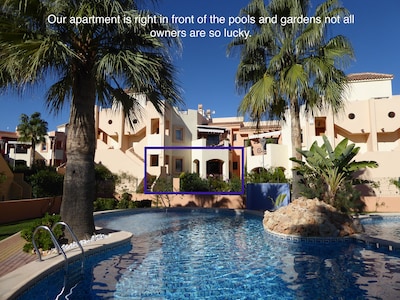 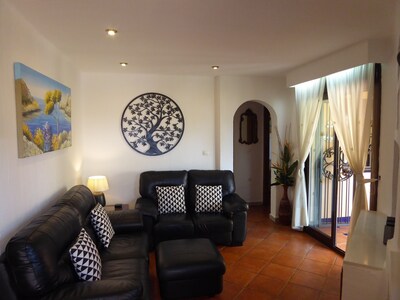 1st Bedroom has very quiet air conditioning for a good night sleep during the hot summer months and an en-suite bathroom. The bed benefits from a luxury foam mattress which is exceedingly comfortable.The bedroom furniture is all dark wood to coordinate with the rest of the apartment. Furnishing consists of built-in wardrobe, two bedside cabinets and a large chest of drawers which gives you plenty of room for your clothes. There is a safe fitted for additional security of your holiday cash, passport and other valuables. In addition there are 2 Philips 1900 watt hair dryers so there's no need to bring your own. A travel cot is available on request for those of you with young children. The second bedroom also has the benefit of a quality, quiet air conditioning unit. All the aircon units are the inverter type which will heat the rooms in the winter months. The second bedroom has two single beds, wardrobe, bedside table and matching mirror.

Ask a question
Member Since 2006

Janet and I have been married for quite a few years (almost 40 years now) and bought this apartment to benefit from cheap flights and the Spanish sunshine. Janet and I both love walking in the Derbyshire Peak District and the Yorkshire Dales with our black Labrador Belle. We like the English pubs too and would never leave England for good, but the British Winter isn't as good as it could be. Janet is a sun lover and I like the beaches, Spain was a good choice. We have come to love the Spanish cuisine, their wines and historic towns and cities. I have learnt enough Spanish to get by and even though Janet is not a linguist she can always make herself understood! We've owned this property from new and have made numerous improvements to it as we spend a lot of time here ourselves. We sit and watch "A Place In the Sun" amusing ourselves watching people going through the same process we did, now knowing what they should be looking for in an apartment!

Gareth Griffith purchased this Apartment in 2006

These apartments are of a higher quality than most and they benefit from having well maintained gardens and pools. So many urbanisations lack any real greenery. In the morning the birdsong is an absolute delight. The location is brilliant. On the urbanisation our apartment is situated right in front of the pool and enjoys full sunshine in the morning and the benefit of shade when it is too hot in the afternoon. If you want sun in the afternoon it is easy to nip over into the pool area. You can still access our wi-fi from most areas of the pool There local amenities are all very close by but not so close that they create any noise nuisance. There are no steep hills to the bars, restaurants or beaches. Talking of beaches, you have a range of popular beaches to choose from. Three within walking distance and loads more just a short drive away. The main beaches will have a chiringuito (beach bar) with toilets and a life guard on duty in peak season. Most of them are blue flag beaches. The pool is open all year round from 9am to 9pm. We rented an apartment to explore Granada and discovered that because it has a slightly larger pool there must be a life guard on duty and for that reason their pool was only open in the summer months from noon until 8pm. Not so with ours! If you're brave enough you can swim all year round! It is our holiday home too. We have done our best to ensure that it has all the things that we need to have a comfortable holiday and that the fixtures and fittings are of a decent standard. There's air-con in both bedrooms and the lounge dining area. Air-conditioning is essential for a good nights sleep during June, July August and September. Flights to and from Alicante or Murcia airport are readily available throughout the year at reasonable cost from almost all UK airports. We also visit off peak and visit towns futher afield like Murcia, Valencia, Benidorm and even Granada when the weather is not at sunbathing standard!

Probably the greenest urbanisation in the area with no buildings higher than two stories. Quality lawns surround the pool rather than tiles and astro turf. We have a fairly heft water bill as a consequence. The community is very multicultural and everyone has a smattering of English our neighbours are from Russia, Sweden, Denmark, Ireland, England, Scotland Belgium and of course Spain. The owners have their annual general meeting (AGM) on the second Saturday in July. In the evening we have a paella party or a hog roast with a live band providing the entertainment. If you are luck to be in Punta Marina at that time, you can join the fun too. At about 20 euros per head, it is a great night out.