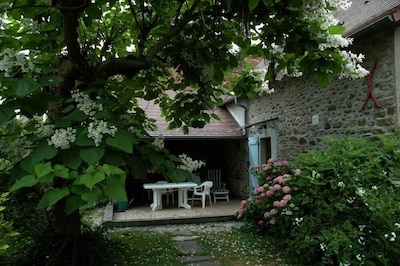 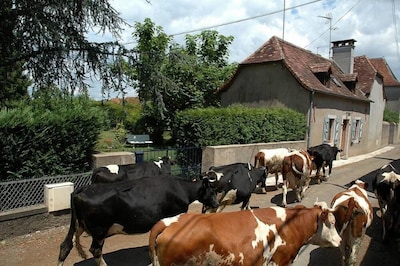 Pretty, petite house with garden between Béarn and Basque Country (for 2-4)

A 3-epis rural gite offers marvellous holidays in the countryside

Since late 2014, the town of Narrenx has been included in the closed selection of Plus Beaux Villages de France (prettiest villages in France). It also received the Station Verte de Vacances seal of approval for environmental awareness.

Navarrenx is also the world capital of salmon fishing!

There is a lot to see in a 20 km radius. You can enter the romantic parks and garden of the Château de Laas that descend to meet with the river bank. Explore the medieval town of Sauveterre-de-Béarn also know as the pearl of Béarn. Experience the Salies-de-Béarn spa town with its salt waters that are 10 times saltier than seawater, its fun pool, and its fitness centre. The town of Orthez, the seat of Fébus, Lord of the Pyrenees, is a large cultural and commercial hub. The town of Oloron Sainte-Marie is a subprefecture at the gates of the Pyrenees valleys, made famous by the Tour de France. Meauléon, the capital of the Basque province of Soul and the vineyards in Monein where you can take tours of wine warehouses and tastings on the Juraçon wine route.

The Basque side (Biarritz, Saint-Jean-de-Luz, Bayonne) is a 1-hour drive, as is the Landaise side (Hossegor, Capbreton), and Saint-Jean-Pied-de-Port and the Spanish border.

We invite you for delicious countryside holidays and getting in touch with nature in a region rich with tradition and culture.

Ask a question
Member Since 2001

A family property, I inherited it from my parents, refurnished it, and made it into a holiday rental. It is has a 3-épis quality label from the Gîtes de France association. After working for 35 years as a journalist in southwestern France,I passed retirement age and dedicated myself to rural tourism creating a Pays de Gaves blog. I want to try and share my passion for Béarn and its mountain streams that I am so fond of with my guests. It fills me with pride that it has been listed as a land of art and history and that the town of Navarrenx in September 2014, was the only destination accepted by the national jury of France's prettiest villages.

What makes this cottage unique

Since late 2014, my town of Narrenx has been included in the closed selection of Plus Beaux Villages de France (France's prettiest villages). It has been included as an eco-friendly tourist destination (Station Verte de Vacances) in Béarn des Gaves, itself officially recognised as a land rich in art and history! Navarrenx is also the world capital of salmon fishing! We invite you for delicious countryside holidays, getting back to nature. The rental gite (classified 3 épis by Gîtes de France) is a small, pretty, and comfortable Béarnaise house recently renovated in Provencal country house stlye. The covered terrace is a pleasant living area that leads to the blooming garden planted with trees and fully fenced. You can find the house in an authentic Bearnaise village set on the banks of the Oloron mountain stream It is 1.5 km from the medieval town centre of Navarrenx.