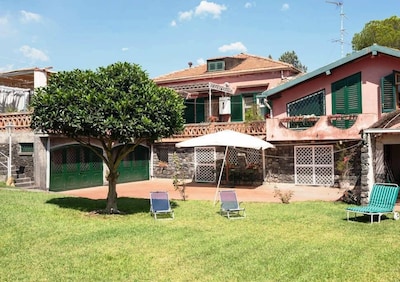 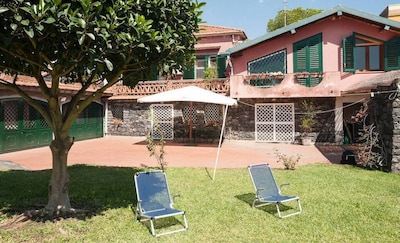 Check in after: Flexible
Check out before: Flexible
Also note:

By car: Leave the A18 CT-ME at the Acireale exit, if you are coming from Catania, or the Giarre exit if you are coming from Messina. Follow the directions for the S.S.114. Drive for about 5km, towards Messina from Acireale, towards Catania from Giarre, until you reach Guardia. At the traffic lights, 300m after entering the village, follow the sign for MARE (Stazzo). After going down for about 200m you will go through a small tunnel under the railway line. As soon as you come out via ... will be on the right. The entrance to the B&B is at number ... (green gate).

By train: Get off at Acireale station and take a treno regionale to Guardia M.-Santa Venerina. Going towards Messina, it's the first stop from Acireale, the second from Catania.

Acireale and the Riviera of the lemons (distance 5 km): baroque town at the foot of Mount Etna built on a lavic plateau (La Timpa). To be visited: the ancient centre of the town with S.Sebastiano Basilica, the wonderful Piazza del Duomo and the Cathedral, SS. Pietro e Paolo church. Very closer to the city is the Riviera of the Lemons with it’s typical Sicilian fishing villages S.Maria La Scala, S.Tecla, Pozzillo and Stazzo. Acireale is also famous for it’s Carnival, the best one in Sicily, which takes place in February.