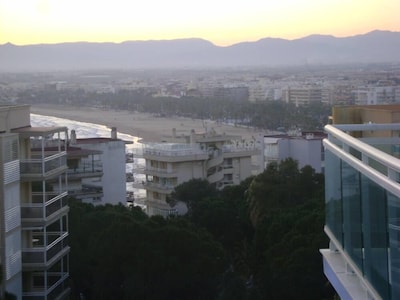 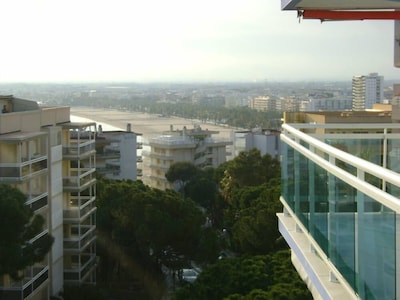 Near to the luminous source of Salou and Paseo Jaime first. Excellent communication by Airplane, Railroad, Bus. Once contracted the apartment, all the information necessary is facilitated to arrive from its destiny to the apartment without no problem.

The apartment is located very calm place, located in the center of which they call 'Tourist Zone' of Salou (where it concentrates most of the tourist lodging, hotels and zones of leisure). It is a small apartment, as it is indicated in the announcement, but comfortable and well distributed. The antiquity of the building in which the apartment is located, and the customs of construction of the time, cause that the block does not have the commercial premises in the low ones of the same building, thus, if what looks for it is rest, is no risk of having the apartment upon a noisy pub or discoteque that prevents the rest. In any case, if what looks for is ambient or nocturnal diversion, the zones of leisure, pubs and discotecas, they are possible to be found to two streets of the apartment. The terrace of about 20 m2, that together with the height of the apartment (6º floor with elevator), practically offers excellent views to to all the Stroll Jaime I, until Cambrils, and to the practical totality of the municipality of Salou, as well as at some towns of the neighborhoods, until mountains of the region of the Baix Camp, even in clear and cleared days, it even can get to be appraised the Delta of the Ebro. It is to about 150 meters of two Beaches, to choose: 'CAPELLANS BEACH' can be arrived at this beach from the beach of the 'Llevant' since the luminous source is last, has about 200 mts. of length and also it is possible to be acceded to her from the 'Brusel.les Street' (extension of the avenue Jaume I). From the apartment, there are access stairs, not to have to accede from these streets. Also it is surrounded by a stroll recently inaugurated the public and who has made of this beach a more appreciated place for his visitors. It is fine sand beach. Or 'LLEVANT BEACH' Is greatest and extensive of beaches of Salou with almost 1.200 mts. of length and with a considerable width. It is located paraleramente, throughout all the Stroll Jaime I. Limita with the Club Nautical of Salou and is the beach that is heart of the city in the heat of. It has all an infantile type of facilities, gymnasium, restaurant with terrace and parks. Also it has parkings, services of primary attention and first aid on the part of the Red Cross. It is fine sand beach. In the end closest to the apartment of this beach, tables of wind-surf, patinetes, and other machines for the practice of aquatic sports can be rented. The apartment, excellently is communicated to arrive, or to move by the zone; not being necessary as soon as the use of vehicle to know or to move. Airport of Reus (to 12 km), taxis (to 100 mts), buses to less than 150 mts with destinies to Tarragona, Reus, Cambrils, with exits in summer each half an hour, and during the 24 hours) (or to other destinies of long distance with other frequencies), railroad (800 approx mts.), boat (400 approx mts). Of between the organized activities or no, that can be made, in the zone (some of them only in the summer season), they are possible to emphasize: Visits to the city of Reus (approx 10 km). World-wide well-known being the cradle of great personalities like Gaudí Architect, General Prim, Painter Mariano Fortuny, Agustina de Aragón, etc. visits guided in several languages are organized, where the 'Route can be known Modernist', as well as visits to the swap-meet of Mondays . Patrimony of the Humanity by UNESCO, where the Roman city of 'the Imperial Tarraco' can be visited, the boulevards, the sport port Visits to the swap-meet of Bonavista, Sundays in the morning, one of the greatest swap-meets of the country Activities in Salou: Rent and short courses of wind-surf, municipal motos of water, swimming pools, popular acts and celebrations, beach gymnasium and day-care center, etc. Emphasizing the great nocturnal supply of pubs, discotecas and places of 'night march' to only 2 streets (what it guarantees proximity and tranquillity). They can obtain more details on the surroundings in: Golf, to 13 km of the Club of Aigües-Verds Golf in Reus, and to about 25 km Of the Club of Bonmont Golf in Mont-Roig of the Camp Thermal Ludico Center in the Hotel Termes Montbrió, in Montbrió of the Camp, to about 15 little Kms. To 10 minutes taking a walk, we can go to the park of “Universal Studios PORT AVENTURA”, Also is interesting the excursion to the Monastery of Montserrat, to the city of Barcelona, or to the Natural Park of the Delta of the Ebro, to barely one hour in car, or also the excursions to the Delta of a day are possible, by sea, starting off from the port of Salou. During almost all the month of August (mainly), many towns of the zone, celebrate their greater celebrations, with a great assortment of activities (in his mayoria gratuitous). Also during the rest of the year, although according to the time, these celebrations can be nonexistent, or more sporadic. Before coming, if it wishes it, it can consult the following page to see the meteorological conditions of which we are enjoying in SALOU.