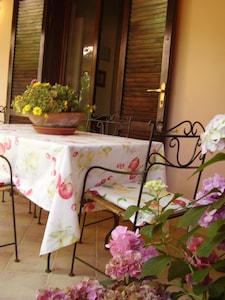 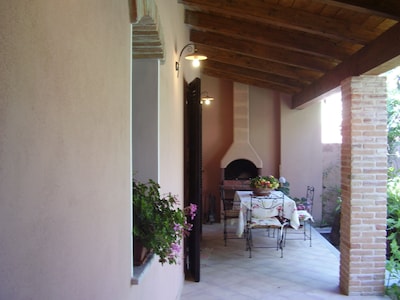 (Text automatically translated) it comes from the 'airport or the port of Cagliari following the direction sulcitana chaff / chia, after domus de maria, you travel about 64 km s 1 ora.Consigliamo in the last 18 km, the coastline of ss195 which starts from the junction of chia , for beautiful views, nature and beaches. from the coast you can see all the Spanish Towers coastal d aquella chia, Malfatano, Piscinni and the port of Teulada.

(Text automatically translated) Guests, 6 restaurants / pizzeria, around a dozen cottages, restaurants on the coast, in the village, 300 meters from the house, markets, bars, town market, parrucchira, optical store, sporting goods, artigianorafo, acrtoleria, Wine, tobacconists. Every Monday 'near a lively and distinctive local market. During the month of July and August L' Summer Teulada: festivals, inema outdoors, musical performances in the square and in the baronial house music concerts classica.Ogni year 's summer, the festival the cake, the cake, bread and in the period of August the characteristic festival of Sant 'Isidoro exhibitions of traditional crafts.