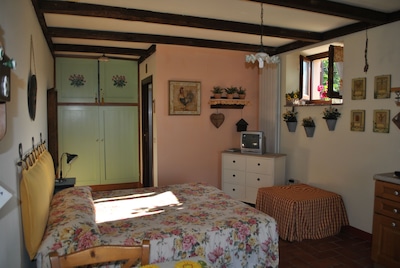 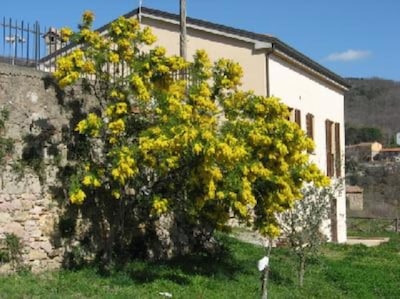 Check in after: Flexible
Check out before: Flexible

From north: motorway A12 as far as Rosignano, to go on on national road SS 1 "Aurelia" to Gavorrano Scalo exit; to continue to Ribolla - Montemassi as far as Roccatederighi.

From south: national road SS1 Aurelia from Rome to Braccagni exit, turn on the right way Montemassi - Sassofortino (Peruzzo road) up to Roccatederighi.

Left the Maremma countryside, flooded of lighth and colours and its see, with the large beaches and the clear water, we go up hills covered of woods, with the rich undergrowth of arbutuses, junipers and brooms, thriumph of scents.

Roccatederighi suddenly appears, as if by magic, on the rock, suspended towards the see and the infinite.

The historical village, on august, lives again its past with the Middle Ages festival.

From here in about an hour everywhere we can reach by our car: the wonderful see of Castiglione delle Pescaie, Punta Ala, the Baratti Gulf, Principina (with the "Uccellina wild park"). Siena and its hills, abbeys, vineyards and oliveyards in Moltalcino, Pienza, Orcia Valley. And then Volterra, San Gimignano, Massa Marittima by roads through woods, pastures, red and yellow fields. A cyclists paradise.

This is also land of thermal baths, the most famous is the incredible Saturnia.

Everywhere we respire the charm of history, culture and - why not ? - great cuisine, made by famous vines and delicious foods.

WE ARE WAITING FOR YOU, IN THIS PARADISE.