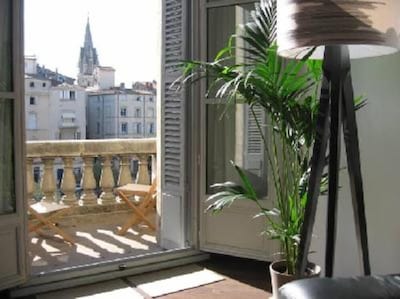 Beautiful, modern apartment in the historic centre of Montpellier

Light and sunny room, with own small balcony and large built in wardrobes. Bedroom faces a side street, with a nice outlook on historic buildings.

Ask a question
Member Since 2009

We purchased the apartment in 2009 after falling in love with the beautiful, vibrant and historic city of Montpellier. It is such a magical place with so much on offer while also within easy reach of the surrounding countryside and picturesque French villages and the Mediterranean coastline.

The apartment was newly built in 2009 in an older building in the very heart of the Ecusson - the historic centre of Montpellier. While the Haussmann style building is bursting with classical charm, the apartment benefits from a modern fit out and features - including a lift which is rare in older French apartment buildings. But the jewel in the crown of this apartment is the stunning balcony that offers beautiful views over a square and basks the Mediterranean sun.

Step out the front door and onto a beautiful square with lovely French cafes and restaurants. There is so much to do within an easy stroll of the apartment but if you prefer to stay in you can watch the action from the balcony with a glass of local wine - the Languedoc-Roussillon region is a major wine producer with Vin de Pays d'Oc and sparkling Crémant de Limoux among its best-known varieties.