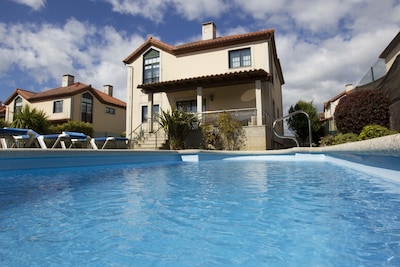 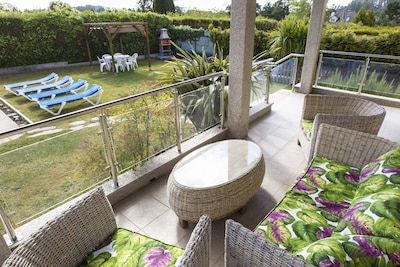 Villa of 300 m2 with garden, pool, 5 bedrooms and 4 bathrooms near the beach

Villa located in the best residential area of the BETANZOS estuary, 6 km from SADA and 4 km from BETANZOS. It has the beaches of Gandarío and El Pedrido at 3 km, that of Sada at 6 km, that of Miño at 7 km and that of Perbes at 12 km. Betanzos is a beautiful town bordered by the Mandeo River, with 13,000 inhabitants that originated in the 13th century. It was one of the 7 provincial capitals of the Kingdom of Galicia. The old town is declared a historical-artistic complex and has three Gothic churches that give it character. The Churches of Santiago, Santa Maria do Azogue and San Francisco. In the latter are the most charismatic medieval graves such as Pérez de Andrade, supported by two animals, a symbol of his lineage, the wild boar and the bear. It also has a Hobby Park, magical place to visit with children. It has multiple restaurants and bars where you can enjoy among others the famous Betanzos omelette. SADA is a fishing village with more than 15,000 inhabitants that substantially increases its population in summer and whose main activities are fishing and tourism. It has a magnificent marina and an unquestionable landscape beauty. We can visit in its surroundings the Pazo de Meirás, Franco's summer residence, the Carlos Maside Museum, the O Castro and Sargadelos ceramic factory. We can also see the protected building La Terraza modernist style. Sada is gastronomy, sea, sport, beach, sun, nature, fun, rest. In Bergondo you can visit the Benedictine Monastery of San Salvador de Bergondo, from the 12th century Romanesque style that is preserved in good condition. You can also visit Pazo de Mariñan very close to the house, which has free guided tours every 45 minutes. A must-see is also the Natural Park of the Fragas do Eume, with 9,000 hectares of Atlantic riverbank forest. One of the best preserved in Europe. Inside the Park is the Caaveiro Monastery of the 10th century from which we can see the spectacular nature of the Park.