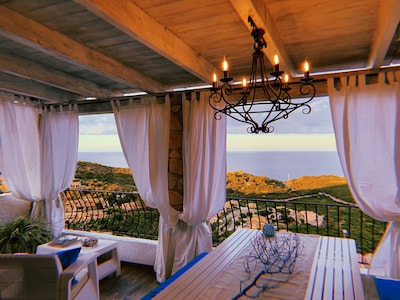 Costa Rei (more rarely known as Costa Rey) is a maritime fraction of Muravera. Located in the south-eastern coast of Sardinia, precisely in Sarrabus, it is several kilometers from the municipality to which it belongs, just 60km from Cagliari. The resort extends for about 10 km, from Porto Pirastu to Cala Sinzias, and has the ideal center at the foot of Monte Nai (200 m) which also gives its name to the surrounding area. The urban agglomeration is divided into the areas of Sa Perda Niedda, Sa Murta (center), Le Ginestre, Gli Asfodeli, I Ginepri (south), Turagri, Rei Marina and Rei Plaia (north).

Half of many tourists, especially young people, has 3 squares (piazza rei, piazza Italia, piazza sardegna) animated in the summer evening for tourists.

Populated mostly in the summer, it is a destination for many tourists and renowned for its crystal clear and fine sand beaches. The beach is also famous for the Peppino rock, in Santa Giusta, a low and wide rock visited by tourists all year round. On the horizon you can see the island of Serpentara.

In addition to the authenticity of the beaches which are mostly free, there are picturesque coves and above all a crystal clear and unspoiled sea. In 2009, the resort was awarded the "Travel blogger award" by the prestigious travel guide publishing house "Lonely Planet", which included Costa Rei among the 10 most beautiful beaches in the world.

Ask a question
Member Since 2017
DEBORA is a Premier Host·The owner or manager of this property consistently provides great experiences for their guests.