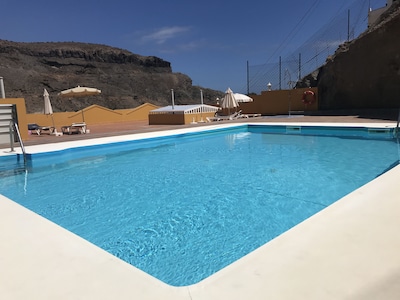 Both bedrooms in the apartment are furnished with new wardrobes and solid wood dressing table/side drawers with mirrors on the wall. Both have ceiling fans and bedside lamps. The apartment / flat can sleep 4. Cleaning and Linen changes each week. We can also offer cot and high chair. Rental rates available on request.

Watch the local fishermen or take a gentle climb to the viewing platform for some breathtaking views of the local area. Boat trips are available to the beaches of Puerto Rico, Playa Del Ingles and Maspalomas. Water parks, Sioux City Western Theme Park and Palmitos animal Park, and deep sea fishing can provide exciting days out for all.

Perhaps take a stroll through the Friday morning bustling street market which stretches around the harbour, selling fresh organic produce and various Canarian gifts and curios as well as clothes, and leather crafts and handbags - just a few minutes from our holiday apartment. Our holiday apartment / holiday rental flat gives you the perfect base to do as much or as little as you like, whilst on your sunshine break. The perfect relaxing holiday location in a lovely spacious apartment.

Puerto Mogan is quite special. Set in a valley around a fishing harbour, alongside a small but vibrant local community. With its own micro-climate, the warm weather offers pleasant sun-filled, relaxing days. We believe its the prettiest and most relaxing resort on the whole of Gran Canaria and is often referenced in guide books as being a really special place to visit and has featured in a recent JET2 advert showing the pretty harbour area of Puerto de Mogan.

Take a walk through the harbour and the old town on the hillside; the pretty white-washed houses, wonderful restaurants and fabulous boutiques. Walk up the maze of narrow paths and you'll find the homes to the vibrant local community. Visit the viewing belvedere for a bird’s eye view of the area and great photo opportunities, or visit the recently excavated historic site.

The island of Gran Canaria is located in the Atlantic Ocean, just 130 miles from the African coast. It is the third largest of the Canary Islands and offers lush forests, Sahara like dunes, mountains and volcanic landscapes. Gran Canaria also boasts incredibly beautiful coastlines and spectacular beaches. It boasts around 340 days of sunshine each year and is usually beautifully warm. The south is the most popular part of the island including the resort of Puerto de Mogán (the picturesque village also known as Little Venice), which is in our opinion the prettiest and most relaxing resort on the island. Gran Canaria has spectacular views and many rugged landscapes, well worth exploring.

Take a drive inland and discover the amazing contrast from the coastal areas. There you'll discover small Canarian communities nestled within vast green and lush land, set amongst rolling hills and mountains with stunning scenery.

Other island attractions: Palmitos Park, offering a unique and interesting look at nature and wildlife. Sioux City theme part, various Water Parks, Barranco de Guayadeque to view the cave homes, take a walk along Meloneras promenade, or a trip to the vast sand dunes of Maspalmos.

The island boasts several interesting museums und culture centres, highlights of which are the recent Museo de la Ciencia y la Tecnologia (Science and Technology Museum) and the Casa de Colón (Christopher Columbus House) as well as the Centro Atlântico de Arte Moderno (Atlantic Centre of Modern Art) – all of them are in the city of Las Palmas.

After the subjugation by the Spaniards, Gran Canaria Island became a famous port of call for travellers, and many of them settled with their families on this beautiful island, bringing with them their own cultures and traditions. As Gran Canaria’s society was always open to everything that came from beyond the seas, the island has enriched itself with visiting cultures, although at all times aiming to preserve its ancient traditions to keep its original identity alive. Due to its long history, this cosmopolitan island became a synonym for ‘culture blends’ with a rich archaeological, architectural, ethnographic and artistic heritage – difficult to find in other places of such small dimensions.

The people of the island like to celebrate festivals, if of religious, folkloristic or cultural nature, and there is always something going on somewhere on the island.

The history of the People of Gran Canaria

Long before the first European sailors arrived on the Canary Islands, all seven islands were inhabited. Guanches, ‘guan’ meaning man and ‘che’ (meaning ‘white mountain’ referring to the snow-crowned Teide on Tenerife) in the native tongue, was the name given to those inhabitants. Guanches are believed to have arrived on the islands between the 5th and the 1st century B.C. probably from Africa. According to Spanish historical records, the Guanches were tall, strongly built, white-skinned, blue-eyed and blond-haired.

The Guanches were cave dwellers, which was a logical development given the climate of the Canary Islands. A cave dwelling was the perfect solution for both summer and winter, keeping people cooler or warmer, and also for storage purposes.

Please ensure you have a contact number before taking your trip.

We have owned the apartment for 15 years so we have a wealth of experience in letting out the property and understanding our clients' needs. You'll note we have excellent feedback. We regularly update and improve our apartment facilities and we're happy to take feedback from our guests, to ensure their next stay is perfect. We have many regular returning clients who come back year after year to enjoy the relaxing space and the unique roof-top pool. We take great care in looking after the apartment for the benefit of all who stay there.

Dawn Moss purchased this apartment in 2005

We wanted a bolt hole in the sun and this is the most perfect location, enjoying year-round sunshine, just 4 hours away. We wanted somewhere that our family and friends could use, catering for every age range, to enjoy the relaxation, the glorious sunshine and the beautiful area, as well as the facilities of the delightful and spacious fully equipped apartment, just like a home-from-home, but in the sun! It is a large apartment, compared to most in the area, which is why we made this choice and with the added benefit of the roof-top pool which is a little oasis. It was the perfect place for us, giving us the option of lazing around on the private secluded balcony, or popping up from apartment to pool for a quick cool-down dip, without having to step onto the street!

Without doubt, the unique benefit of this apartment is the roof-top pool on the building! Not many apartments in the area offer a fabulous roof-top pool! And one that is rarely busy, with plenty of available sunloungers! Mogan's micro-climate means warm weather virtually all year, so you'll be glad of the pool being just upstairs! The apartment is large, spacious and air-conditioned, with fabulous open plan living, with a private and secluded balcony. Plenty of space for all the family. It's a bright modern apartment with flat screen wall-mounted TV, with over 100 channels including ALL the usual UK channels, via satellite (as well as many Sky channels) and free wi-fi. The same comforts as at home, but in the sun! This apartment is bright and fun. It's a holiday apartment that makes you smile. It really offers genuine comfortable living, true relaxation, lovely roof-top pool (which is heated during the winter months) and privacy. For a trip out, take bus to other parts of the island. Fares are usually cheap - 2 or 3 euros each way. Boats leave from the harbour area every half an hour to other resorts such as Puerto Rico, Anfi and Arguineguin. Taxis can be taken from the taxi rank near the beach. Drive inland where you'll find contrasting lush green mountains and stunning views. The island of Gran Canaria is located in the Atlantic Ocean, just 130 miles from the African coast. The third largest of the Canary Islands it offers lush forests, Sahara like dunes, mountains and volcanic landscapes. Gran Canaria also boasts incredibly beautiful coastlines and spectacular beaches. It boasts around 340 days of sunshine each year and is usually beautifully warm. The south is the most popular part of the island including the resort of Puerto de Mogán (the picturesque village also known as Little Venice), which is in our opinion the prettiest and most relaxing resort on the island. Gran Canaria has spectacular views and many rugged coastlines worth exploring.