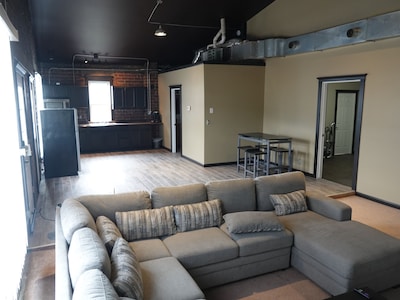 Stay one night or stay for a month! The longer you stay, the more you save!

Ryan grew up in SLC and moved to Arcola in 2006. Ryan is an artist and owns a construction business in Arcola. He loves to renovate old structures with tons of character. He is currently working on a victorian home built in 1890. Mary grew up in Teutopolis Illinois. She is a nurse anesthetist and works at a hospital in Effingham, IL. She loves to cook and drink wine. Together they have 6 kids.

This property has so much history, that we just love it so much. We completely renovated it in the fall of 2018. It was once a stop for Ella Fitzgerald and her band, where a local hero, Joe Ernst, served a busload of hungry people breakfast. They were so hungry, because they could not get served elsewhere due to the color of their skin. 17 year old Joe Ernst was working alone that night. "The only thing I thought about was they was hungry and were wanting something to eat, and that's what we done," Ernst said. One woman helped at the register and promised to make everyone pay. That woman at the register was singer, Ella Fitzgerald. Joe didn't know her. She said he was such a nice guy that she sang him a song and really belted it out, which embarrassed the young boy. Some in the community were upset that Joe served those particular patrons. The owner closed the restaurant. The town is very proud of their "not your average Joe" Joe became a US WWII navy hero and tried to locate Ella when his ship would port, to speak with her again, but he was never able to make that connection. Another historic member of the community, Pat Murphy owned a service station which is now our renovated apartment. Since Pat was a mechanic that could fix absolutely anything, he became a local celebrity for the help he gave Charles Lindbergh, the famed American Aviator who made the first nonstop flight across the Atlantic Ocean in 1927. Lindbergh was a U.S. Mail pilot prior to his famed flight and during one of these mail flights incurred engine troubles, requiring him to make an emergency landing outside of Lovington, IL. No mechanics in the immediate area knew how to work on airplane engines, so Pat Murphy, was called to help. Pat cut a piece of wire from a farmers fence and fashioned it into a working part to fix Lindbergh's engine. Pat got Lindbergh back on his journey to St. Louis.

Our place is on the ground floor and parking is a breeze. The beds and furniture are brand new and we tried to make it as cozy as possible to allow our guests have fun and be relaxed to get a good night's sleep.