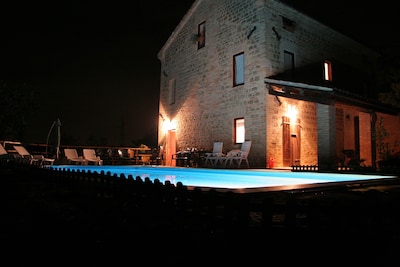 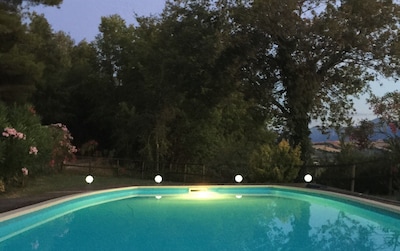 Macerata Open air Opera Festival. 41st Macerata Open-Air Opera Festival Macerata Sferisterio 15 July to 14 August, 2015. The open-air opera festival in July has found an international following and takes place in the 7,000-seater Sferisterio - a monster of a Neoclassical arena erected by private subscription in the 1820's. As you swoon to a Verdi aria, you might care to know that it was originally built as a stadium for pallone, or Italian football. Urbs Salvia. (Urbisaglia) 5km near to this small village lie the remains of Urbs Salvia. The city was founded in the 1st century BC and, like so many of the Marche's Roman towns, wiped out by Alaric in 408. For once this is an archaeological site with things you can actually see - the amphitheatre, built in the 2nd century AD, is one of the region's most conspicuous Roman ruins.

The beaches of Civitanova Marche and Porto San Giorgio are both within a 30min drive and give a wealth of fish restaurants and bars. Both beaches are spotless and lead into the calm waters of the Adriatic Sea. All amenities are at the beach itself including showers, toilets and places to eat.

The nearest Airport is Ancona and is approx 50 min drive to the house. Alternative airports are Pescara (1.30 hrs) and Bologna Forli (2hrs). All 3 airports are supported by Ryanair and Alitalia.

The village of Ripe San Giniseo is 1km away and has a variety shops, bars, restaurants and wine cantina which bottles wines produced from local grape varieties.

Casa Tuttavia is ideally located with access to all the surrounding towns and villages including San Giniseio 5km, Sant'Angelo in Pontano 5km, Gualdo 15km, Sarnono 25km and the large town of Macerata 25km all the towns mentioned have bars, restaurants, shopping and macerata has opera.

Casa Tutti has been owned by Barrie and Matthew since 2003. We have fully restored the property and designed it to accommodate 2 large families or groups of friends. We have enjoyed numerous holidays at Casa Tutti and we have ensured our guests also enjoy there stay by providing unrivalled service. We insist on the service we expect from a holiday is provided to our guests at all times. Le Marche is a beautiful and unique part of the world and Casa Tutti is an excellent base to explore it from being positioned in the heart of the area.

Barrie purchased this farmhouse in 2003

We explored Le Marche for over 3 months traveling the length of the region, during this time we viewed and stayed in 100's of properties before finding Casa Tutti. The moment we arrived we felt like we were on holiday. The views of the Sibillini Mountains and the sounds of the birds meant we had found what we were looking for. Casa Tutti is perfectly positioned amongst olive and mature trees allowing total privacy. But that said it has easy access to the main routes to explore the treasures of Le Marche. This is very important as you can drive for miles around twisty roads before getting anywhere which does tend to become laborious. All we had to do now was develop the property to allow for years of shared and enjoyed family holidays of which it has achieved.

What makes this farmhouse unique

Our guests always comment on the excellent location and facilities that Casa Tutti provides. We have put a lot of thought and effort into passing on the years of experience we have gained from visiting the local area. I myself spent 22 years traveling the remotest corners of the world within the armed forces. My time spent in Le Marche revealed something very special. The landscape provides unrivaled beauty and the local people are some of the friendliest I have ever met. The Local's do not see you as a tourist or an intruder but as a future friend. This is what makes the difference between other areas of Italy and the world. Casa Tutti was picked not but chance but through planning and hard work so we would never feel jaded of visiting the house and years on this is still the way.