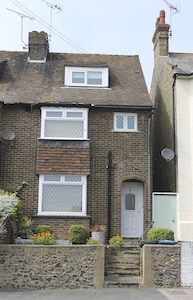 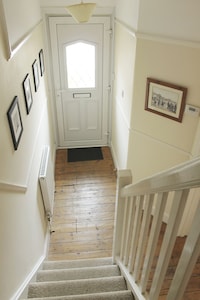 Seaside Townhouse on Coast of Kent

king · single
much light, airy, window with view of street

Broadstairs has seven magnificent sandy bays extending on each side of the town centre. Stone Bay is only a five minute walk from the townhouse. Two others nearby, called Joss Bay and Botany Bay, have recently been reported on the list of the best beaches in the UK along with Stone Bay.

High speed train service between St Pancras International Station London and Margate, Broadstairs and Ramsgate in about 80 minutes. The train goes via Canterbury and Ashford and has reduced the travel time to the capital by forty-five minutes.

Broadstairs is situated on the south-east coast of England between Margate and Ramsgate, approx 70 miles east from London. Broadstairs is more picturesque than Whitstable or Herne Bay and the neareby cathedral town of Canterbury is an interesting excursion.

Tesco's supermarket is a ten-minute walk away in the centre of Broadstairs which is fully served with a variety of shops. These can be frequented easily without the use of an automobile. In June, Victoriana is on full display for the Dickens Festival when locals have lovely recreations of dress from the period to the delight of visitors. Bohemian Londoners prefer to wait until August for the annual Folk Festival with banjo-pickin on every corner.

Pat and Joe McEvoy were both raised and educated in the USA and both have had careers in education: Joe as a academic physicist in Europe and America, and Pat as a school administrator and later counselor at the American School in London. Their winter home is in London where they have lived since 1973.

Joe McEvoy purchased this house in 2002