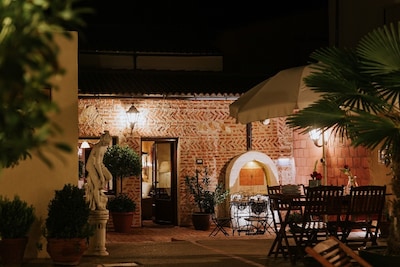 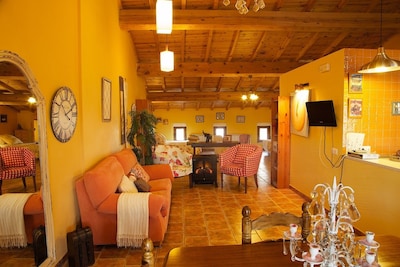 Luxurious and Organic Villa In Wildlife Reserve Near Salamanca - Winetourism

MARIA JOSE CELEMIN is a WRITER from Central Spain. "THE GOD OF GREEN VALLEYS" has been her main novel, which describes Beautiful Alamedas***** as it was before its restauration, as well as the organic farm and winetourism, and the Wildlife Reserve.

Beautiful Alamedas*****, as the organic farm, Al-Kauthar, the Wildlife Reserve has become into a Lost Paradise, a place for welcoming and reception to receive the traveller.

Maria has released last summer her MAGAZINE about organic issues "SPIRITUAL ECOLOGY" that the traveller will find into the house, as well as the novel. She also conducts a RADIO PROGRAM in Valladolid about ORGANIC ISSUES by promoting the organic producers in Castilla and Leon.

III FESTIVAL OF MUSIC "NIGHTS OF AL-KAUTHAR" in CASTRONUÑO.

Events can be seen at www.beautifulalamedas.com

There is a small beach (Duero river). You can walk by there or fish. The Water Slides Pool is in front of the beach.

SALAMANCA has been declared as WORLD HERITAGE CITY. A jewel. It is 30 minutes by driving to the house by the highway.

VALLADOLID is the capital of Castilla y León and it is also 30 minutes by the highway.

TORO is a beautiful MEDIEVAL CITY and a growing wine area where very important wineries are already established. It is 20 minutes by car.

TORDESILLAS and MEDINA DEL CAMPO are also very artistic places since they took a decisive rol at the History of Spain. They are 20 minutes by car.

MASSAGES: both, 45 or 30 minutes relaxing massages at the house massage room by a qualified masseuse.

LA CASA DEL PARQUE is the center that has the documention of the Wildlife Reserve. A remote control lens at this building allows to watch how birds make their nests. Duero river has created an ecosystem with reedbed along the shore, poplars and irrigated land hectares strech to a holm-oak wood. A fossilized dune outlines on the sky a hat-shaped picture.

Castronuño has a factory where artisan and delicious cheese is made. They have been rewarded in many occasions by Castilian Cincho reward.

MARIA JOSE CELEMIN is a WRITER from Central Spain. "THE GOD OF GREEN VALLEYS" has been her main novel, which describes Beautiful Alamedas***** as it was before its restauration, as well as the organic farm and winetourism, and the Wildlife Reserve. Maria has released last summer her MAGAZINE about organic issues "SPIRITUAL ECOLOGY" that the traveller will find into the house, as well as the novel. She also conducts a RADIO PROGRAM in Valladolid about ORGANIC ISSUES by promoting the organic producers in Castilla and Leon. EVENTS AT BEAUTIFUL ALAMEDAS: More INFO at the Beautiful Alamedas site.

This property was the house of my grand-mother, who from I have heritaged my Faith in life, so when I restored, I thought I wanted the traveller to be transported into a beautiful place from where they remembered the decoration, details, cleanliness, softy linen, the joyful and cheerful colours, fountains, and the magic of the garden. All my being has put to decorate this house. Her spirit is a blessing for my guests, as the spirit of "The God of Green Valleys" is in the river, in the reedbed, the oak mountains, the black poplars that border the river as a jungle with clematis. At sunset, everything is magic and wild porks and foxes come from the mountain to the reedbed to sleep. For my guests, is delicious to go to the water park, just in the middle of the reserve, as to visit us to the organic farm and see and try the fresh fruits from trees, like prunes, cherries, apples, pears, and all type of vegetables, as hazelnuts and walnuts. My brother and I, we planted helped by my father when we were kids more than 500 trees and we have been able to make this place into a botanical garden worth seeing. A natural spring waters all the place. Last year, Esteban, my brother, planted 1000 vines of a local variety of grape called "Albillo Real", from which he is making a delicious wine that our guests enjoy to drink.

PRIVILEGED AND STRATEGIC POSITION OF CASTRONUÑO Castronuño has a privileged and strategic position, because it is in the MIDDLE OF SPAIN and very WELL CONNECTED by the Castilian highways. Castronuño is in the middle of main cities as SALAMANCA, 60 kms, VALLADOLID, 60 kms, ZAMORA, 60 kms, MEDINA DEL CAMPO, 28 kms, TORDESILLAS, 20 kms, and TORO, 18 kms. WE ARE IN ONE OF THE MOST EMBLEMATIC WINE TOURISM D.O. (TORO AND RIBERA DE DUERO) We are just in the middle of the D.O. Toro, where the most emblematic wineries are all over to visit, not just like a massive wien tourism, but like a personal and familiar one. CASTILIAN GASTRONOMY Castilian gastronomy is just delicious; You can "tapear" by the surroundings, or have an amazing dinner at the other restaurants. You will find the well known "morcones", which are delicious canapés made of a delicious bread and GRILLED LOIN, MUSHROOMS and GREEN PEPPER, cooked with OLIVE OIL and a touch of garlic. It has a delicious flavour. Then, you can taste "BROKEN EGGS", and after, a countless of the best Castilian gastronomy: CROQUETTES; "cayos"; FRESH ANCHOVIES; MUSSELS; SPANISH OMELETTE; or quail eggs. All the area behind the "Plaza Mayor" has a special charm; the plazas of "Santa Ana" and "Coca". "Santiago" main street is very nice and, on the opposite side of the "Plaza Mayor", "Platerías" area is so special. There, you will find a delicatessen shop called "Casa Brígida", and, walking down this street, a chocolate shop and tea lounge called "El Sueño de Neblí". Around the "Plaza Mayor" there are many TEA LOUNGES AND COFFEES full of TERRACES where MILSHAKES and other can be tasted, and it is also very nice to be there. Because of the OPEN AND INTERNATIONAL MIND OF MARIA, you will find in the middle of "THE REAL SPAIN" a luxuriant villa that could be in the middle of Manhattan.