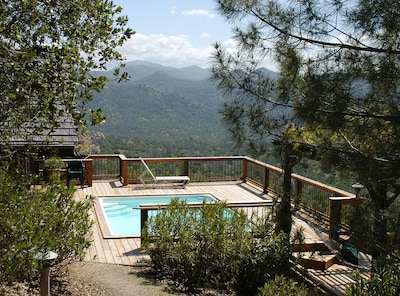 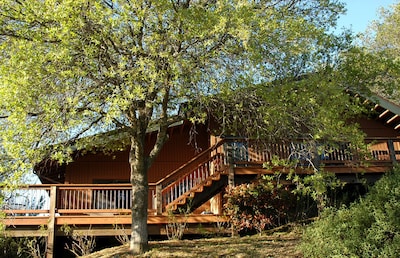 Please note: Maximum occupancy is 4. Rates noted are based 2 people. The hideaway is ideal for 2 couples.

Ask a question
Member Since 2006

Professionally, Duane and Barbara are both in the field of architecture. Barbara is also a birder and had been trapping and banding hawks for the Golden Gate Raptor Observatory in the Marin Headlands for over 13 years before moving to the Yosemite area. She is now a Master Hummingbird Bander and has over 15,000 records in her database. Duane, a transplant from southern Oregon by way of the bay area, grew up on a farm and had a desire to get back to working with the land as well as woodworking, which has become his passion. They now love sharing this special piece of paradise with guests worldwide. Duane and Barbara have been volunteer fire lookouts for the US Forest Service for 18 years. They know the lay of the land and are more than willing to share their knowledge of the local topography. Duane is also an active member and past president of the Mariposa Rotary Club. He would be pleased to have you join him for an early morning breakfast meeting, if you need a make-up session.

purchased this Cabin in 1995

The Robinson's bought Indian Peak Ranch in 1995, after vacationing there for more than 7 years. They fell in love with the ranch from day one and had written a little note in the guestbook –-- “if you are ever interested in selling, call us”. As Duane likes to say – “it was really meant as a compliment”. But low and behold, the previous owner did call on Valentines Day in 1994 and asked if they would be interested in purchasing the ranch. After giving it some thought, they decided that they could indeed “give it all up” and move to the country. Thus they took ownership in March of 1995, and as they say, the rest is history. They have been greeting guests from all over the world since 1995. Duane and Barbara have traveled extensively, but feel lucky to call the Sierra Foothills home. They continue to find Yosemite magical no matter what time of year. Recently they were hiking in Yosemite on a remote and less-traveled trail and were lucky to find themselves sharing the forest with a Great Gray Owl, the largest owl found in North America. This rare sighting was a moment to treasure.

What makes this Cabin unique

The guesthouse at Indian Peak Ranch, known as the Yosemite Hideaway, is the original home on the property. Built in 1979, this jewel has a long and colorful history. Once you have stayed at the ranch, you will never forget it. As a recent Australian guest said – “it is a place that will stay with you forever”. It is truly that special and that magical. It is hard to describe what makes this place so special. Perhaps it is the incredible views or the solitude that words cannot describe. Honeymoon couples invariably arrive atop the mountain and quickly shed tears of joy for having found this place. This mountaintop hideaway is lodging like no other. Whether you think of it as a luxury hideaway or personal resort, it is truly unique. Of special note...Indian Peak Ranch is an official USGS scientific hummingbird research site. The owner is a Master Hummingbird Bander and is working on a population genetics study. Currently she is taking a break from banding, but you will still see lots of hummingbirds at the ranch. They go through over 800 pounds of sugar each year just to keep the hummers happy!