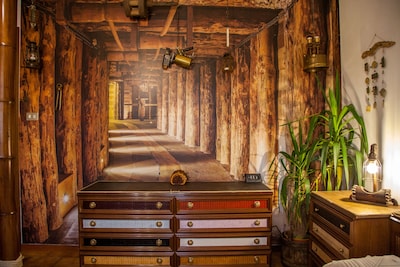 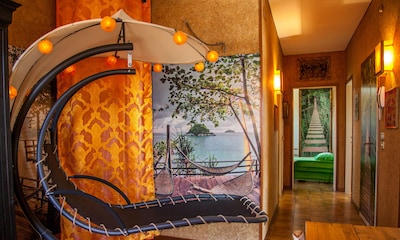 Please ask the owner or check their rental agreement when booking the property.

The territories of the Mantico in the past were an extensive forest and place of ancient sylvan cults in fact the toponym derives from the Latin Nemus Manticus - Wood of Magic / Divination.

Later it was the property of the Benedictines and hunting grounds of the Scaligeri.

Today the Magione is crossed by the Cyclopist of the Sun coming from the Brenner and in 10 km you arrive directly in the heart of Verona.

There is a small airport for experiences of Parachute and Flight, but the territories of the Mantic are especially characteristic for the typicality of its taverns and inns along the course of the Adige up to Verona.

In the small country village of San Vito al Mantico it is possible to taste the typical Italian and Veronese cuisine at the trattoria Biondani, the wonderful and creative pizzas at San Francisco and Jonathan or taste local wines at the varipinta Osteria Accordini.

In the village there is a small shop selling fruit, vegetables and groceries, a bakery and a pharmacy while the children's playground is in front of the elementary schools.

The Manticus 1-Uan is located in San Vito al Mantico in a small country village just outside Verona. Being located in the middle is an ideal starting point for discovering the romantic city of Verona, the wonders of Lake Garda, the Valpolicella wine area, the spectacular scenery of Monte Baldo and the unspoiled nature of the Lessinia Natural Park.

10.3 ParcoNaturaViva-ZooSafari - Safari by car between lions and giraffes.

10.7 Arena di Verona - Entrance to the heart of Verona

17.2 Medieval Times - medieval theme dinner show. Once I was a king.

27 Punta San Vigilio - Bathing in the mythical bay of the Sirens.

40 Malcesine cableway - for the peaks of Monte Baldo with views of Lake Garda.

131 Venice San Marco - excursion in the city on the only water in the world.