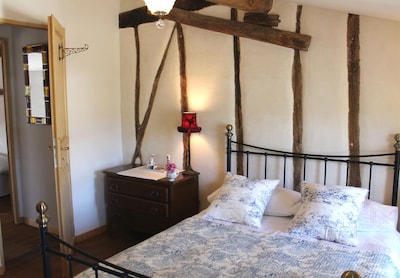 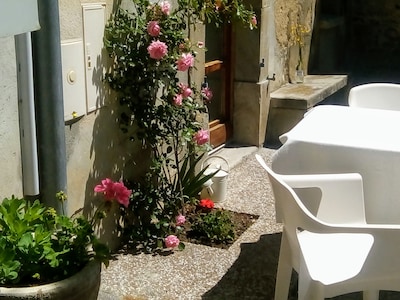 Cot and highchair are available, please advise. The ground floor double bedroom with WC may be suitable for those with limited mobility.

Ask a question
Member Since 2011

We love our house in the foothills of the Pyrenees in this beautiful, unspoilt region of the Languedoc, even though it is almost the polar opposite of what we set out to find. It’s not small, it’s not manageable and it was partly derelict, all the things we said we would avoid during the planning stages, many of which took place in the pub in my home town of Workington, Mmmm, maybe that was it. Nick had put in an offer for another house on a recent visit that he had made alone, and so confident was everyone that it would be what I wanted, the vendor had set off from Holland to sign the necessary paperwork. So despite the consternation of the agent having made assumptions about what I would and wouldn’t like despite never having met me (not sure what Nick’s excuse was) we continued our search. Which led us to the house in Sonnac Sur L’Hers, really 2 houses that the previous occupants had begun to knock together, i.e. bash 2 holes in the wall between the ground and first floors. The main house had 6 bedrooms, all in various states of repair, and with potential for at least 4 more in the attics, a brown bathroom suite in a bathroom “big enough to hold a tea dance” according to the agent, and a huge sunny terrace with views across the churchyard, fields and hills. Oh, but what a lovely feel there was. The huge blue shuttered house standing on the ancient village square with its church and beautifully restored stone walls of the Marie - our taxes obviously stretch to proper, authentic, lime render. The church bells chime right outside the bedroom window that Matthew and George shared on one of their many snowboarding trips to the Pyrenees. So no sleeping past 8am although thankfully they don’t ring through the night. We have stayed in some of the most remote, picturesque villages in the south of France and returned home shattered, each night’s sleep ruined by the incessant tolling of church bells.

Carolyn Curr purchased this Cottage in 2006

The purchase was fairly smooth and the house was ours within 3 months, although where the log burning stove was that would keep us warm during the cold winter nights of the Aude, was a black hole. There was a cat in the secret garden, which didn’t concern me at all, and a bat in the corner of the mezzanine room which concerned me a great deal. (We left the door open taking a chance that it would fly out rather than all its mates fly in). Our first few days in the house were spent in a daze, wondering what on earth had possessed us. The house we discovered had been 3 houses in the more pragmatic days of the 1700s. There was evidence of 3 front doors and 2 staircases remain, lovely winding oak stairs from the main sitting room all the way into the attic (derelict) and a spiral staircase tucked away in the back of the kitchen. The third probably crumbled away sometime in the 19th century. So, completely overwhelmed, we spent the week drinking wine then set off to catch our flight home.

It's a beautiful region in southern France, fields stuffed with sunflowers, grapes ripening on the vine, the sun mellowing the ancient stone of ruined chateaux that stand on rocky outcrops, testament to past conflicts of Languedoc. We had an early start from Sonnac sur l'Hers following the old railway line through Camon, a plus beaux village de France, onto Mirepoix and Fanjeaux, all key strategic towns during medieval times and the crusade against the Cathars. Quiet roads, twisty cols (if you want them in this heat) and wide valley floors that sweep through vineyards and ancient towns and villages, make cycling Languedoc joyous. I was grateful for the old French law decreeing its people should always have free access to drinking water as I replenished my water bottle (and dunked my face and arms) in the centuries old lavage (communal washing facilities in a bygone age) in a tiny village by the roadside.