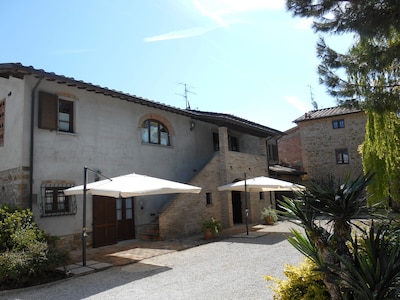 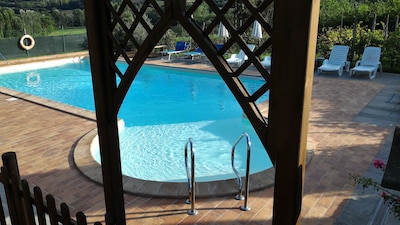 Podere Casenove is located just 6 kilometers from the Renaissance town of Sansepolcro, the birthplace of Piero della Francesca, Luca Pacioli and Cherubino Alberti, and 9 kilometers from Città di Castello.

Our holiday apartments are located on the border line between the Upper Tiber Valley of Umbria and the Valtiberina Toscana; this valley is a large basin formed by the filling of the Tiber lake which occurred in the Pliocene age and crossed by the Tiber river for about 50 km.

This predominantly mountainous area is the crossroads of four regions (Tuscany, Umbria, Romagna and Marche) which give it multifaceted influences in architecture, customs and traditions, in craft and gastronomic products, up to the same language, determining a very particular character compared to the Tuscan context.

The valley presents the visitor with a sweet and suggestive landscape of the valley floor, characterized by rivers and streams, groves and farmhouses, while picturesque hills and rural castles overlook the hills above.

The Municipality of Citerna is located in the province of Perugia in the center of the Valtiberina.

The Cittern territory consists mainly of agricultural land (on which the local economy is based) and hills covered with woods.

Citerna is considered the "terrace" of the Tiber Valley; from here in fact you can admire, with a simple glance, the whole valley crossed by the Tiber river which starts from Città di Castello and extends up to Sansepolcro.

Thanks to its beauty and the panorama that can be admired, Citerna is one of the "most beautiful villages in Italy".

The monuments that can be admired in this medieval village are: the Rocca (a fortification of Lombard origin recently restored), the Church of S. Michele Arcangelo (where a magnificent Madonna and Child is preserved), the Church of San Francesco ( probably built in memory of the passage of San Francesco d'Assisi to Citerna) and Palazzo Prosperi with its medieval walkway (also called "of lovers" and home to interesting small exhibitions).

The history of the Tuscan Valtiberina

Valtiberina Toscana was in the past a meeting place between different civilizations: Umbrian, Etruscan, Byzantine and Lombard. The Roman patricians in the time of Cesare Augusto noticed its beauties and built villas there. Subsequently the Church and the abbots erected solid monasteries while the saints discovered, often in hidden corners, places suitable to satisfy their anxiety of mysticism, so much so that still today they resist majestic places of faith such as the hermitages of Cerbaiolo, Montecasale, Casella and the Sanctuaries of Petriolo, Belvedere and Canoscio.

Birthplace of many renowned artists including Michelangelo Buonarrotti and Piero della Francesca, it has maintained its artistic vocation over time.

Charming towns such as Anghiari, Citerna, Monte Santa Maria Tiberina, Montone: medieval castles and towers, scattered parish churches and farmhouses overlook the green hills that slope down towards the valley. At the center of the valley, Città di Castello is the most important and most populated settlement, rich in medieval and Renaissance monuments which testify to its historic role as a crossroads between Florence, Urbino, Perugia and Rome.

The population of the Valley respectful of the ecological balance, is mindful of its traditions and is proud of its hard work.

Even today, in fact, the main and most developed working sectors are those related to the production of period furniture, ceramic manufacturing, textile craftsmanship, ironworking, goldsmithing, typography and paper converting.

We are also a few kilometers away for visiting the following sanctuaries:

Other itineraries of naturalistic interest are:

• The artificial lake formed with the Montedoglio dam.

Don't pay for your booking outside our website or app.