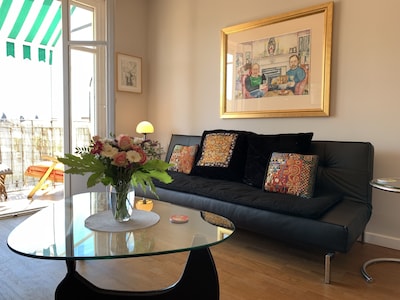 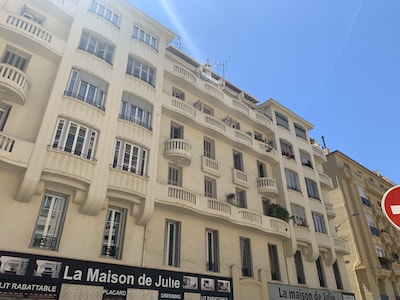 Large bedroom suite with adjoining bath. French doors open onto a separate 'private' balcony off the bedroom. The romantic Queen-sized canopy bed is the perfect place to end a fabulous day on the Riviera! The bedroom is also furnished with an antiqued white armoire, dresser, desk, bedside table and a reading light. Note: the living room couch converts to a 'double' bed that will sleep an additional 1-2 people. A frosted glass door closes to provide privacy should the living room be used as a bedroom and the french doors to the balcony may be opened there too allowing both sleeping areas access to the fresh Mediterranean breeze.

About Don Corliss and Franklin Reed

We live in Seattle, Washington USA and when we are here, we are dreaming about our next visit to Nice. We are avid francophiles and do our French lessons everyday. Don is a retired pharmacist and Frankie is a retired accountant. This is our personal pied-à-terre and we enjoy being able to share it with renters and friends. We love art, culture, and travel. Don grew up in the Pacific Northwest and was introduced to Europe and world when he served in the US Air Force as a captain after finishing pharmacy school at the University of Washington. Frankie grew up mostly in Texas, being a "son of a gunner" of a B-52. His dad was originally from Texas and that is where his father decided to retire. He had a love for languages in high school, but thought studying accountancy had more practical career options-not sure if that was true. He studied accountancy at the University of Texas at Arlington. Frankie fell in love with Seattle on a 1989 visit there during a choral convention and eventually moved to Seattle in 1997. Frankie & Don met while singing in the Seattle Men's Chorus. Frankie finished his career up before retirement being the Director of Finance for the Seattle Choruses.

Don Corliss and Franklin Reed purchased this Apartment in 2011

Angels brought us to our 'dream in the sky!' Our finder Rebecca Russell was one (www.coteabode.com) and the Niçois selling agent the other. His name was Ange (angel in French) and he flew up the 7 flights of stairs to meet us there while we went up in the caged elevator. He had wings, because he met us at the top when the elevator arrived. We were captivated by the apartment's charm and views. You just know when it's right!

180 degree rooftop views and centrally located to walk to every area of Nice in minutes. Close to the beach. Close to the grocery store. Close to a large park. Close to local restaurants. Peaceful neighborhood. Charming caged elevator and old-world charm. Seriously, what's not to love!